The Deputy Prime Minister has my first trilogy. Dunno that he will read it, mind you, but he has it. How do I know? Well it’s like this…

Husband happened to mention at his university, when the subject of Lake Chini in Pahang state came up, that it had been the inspiration for the setting of one of my books, Gilfeather, and was the basis for the Australian cover. [For those of you who have read it, the floating islands of the Mere can be found at Chini.]

The people he was talking to were looking for a gift for the Dep. P.M, on the occasion of the opening of a university project at the lake last weekend, and so….

I have bought a membership of Denvention, the World Science Fiction convention of 2008. My first worldcon was in Glasgow, three years back, which I went to because my daughter was then living in Glasgow.

She is now living in L.A., and Denver is somewhere between L.A. and my other daughter in Virginia, and the con is at the right time of the year [just before I take on my August-September babysitting-grandson-duties], so it seemed fated I must go… 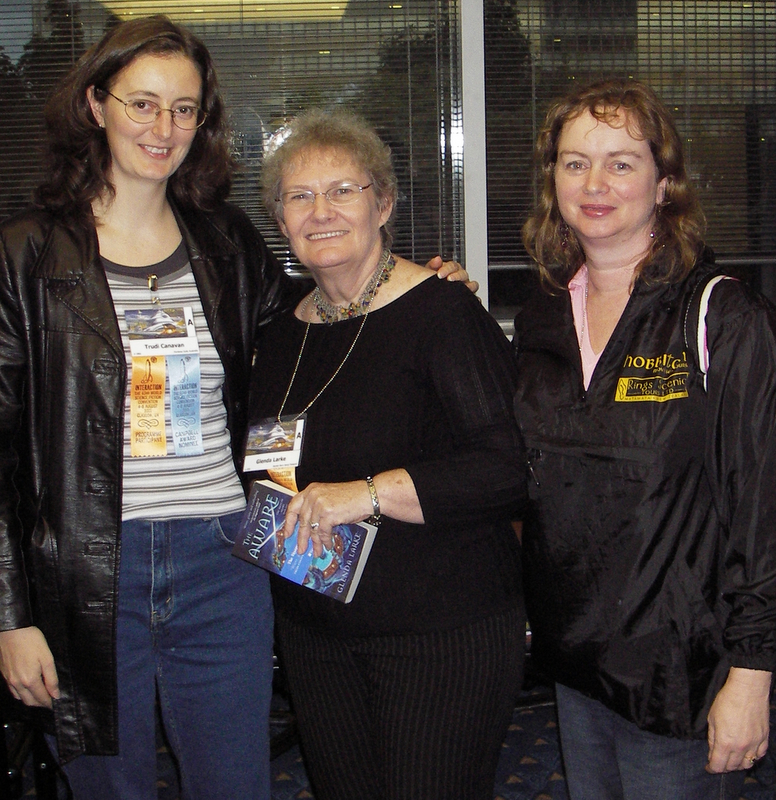 And not long now to Easter and the Australian Natcon where I am a guest.

They will be my only two cons this year. 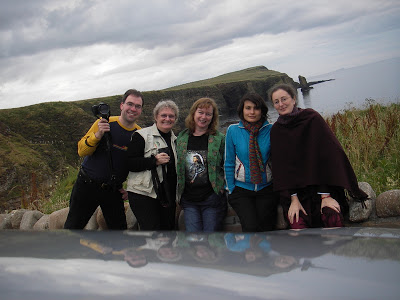 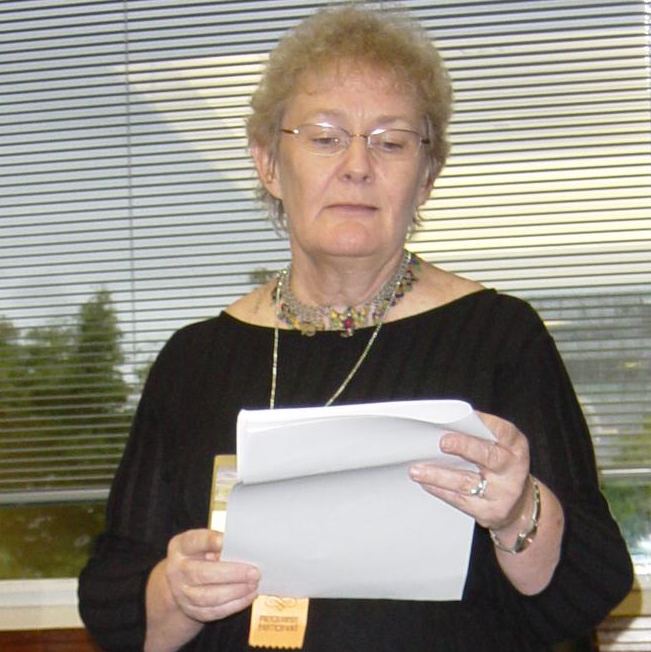 And some memories from Scotland: With author extraordinaire Trudi Canavan, and Donna Hanson (who will be my room mate again in 2008).

With Paul Ewins, self, Donna, Nashii (my daughter), Trudi, in the Orkneys.

Me giving a reading.

Photos by Trudi and Paul.

Remember this “before” pix, to the left? That was my new table that we didn’t know how to turn up the right way! 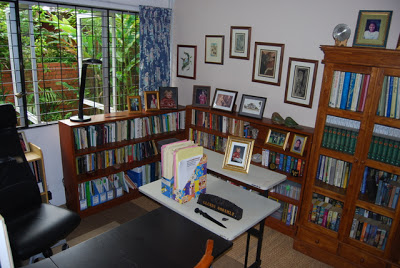 Well here are the “after” pix. As I have said elsewhere, I can write just about anywhere. But it is great to have one’s own room with all the appurtenances. Doesn’t make you a better writer, but it sure makes you a more comfortable one. 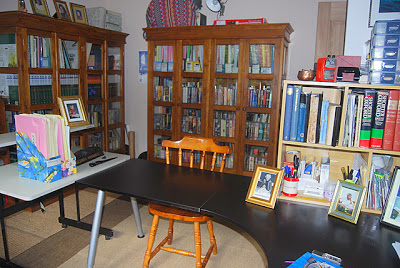 First “after” pix is the daytime view from the doorway.

Second is the view from my computer workspace. 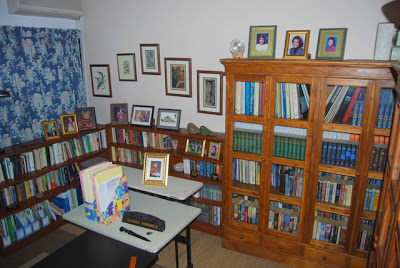 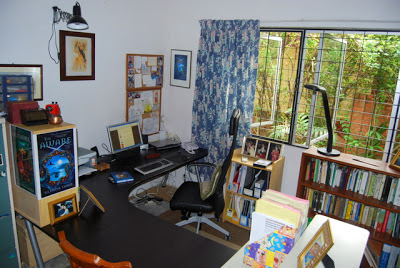 Third is the view from the doorway at night.

I now have no excuse not to finish “Rogue Rainlord” have I?

It is more usual on the last day of the year to look backwards, and contemplate the year past.

I am not going to do that. I want to look forward.
To all the good things ahead.

January: Another chance to win an Aurealis Best Fantasy Novel in the coming month. (Ok, I am not really expecting that one, but well, it’s nice to have a chance. And if I don’t, Jenny Fallon might, and that’s almost as good…)

March: Being a guest at a sff con. First time, and in my home city. Swancon/Australian Natcon, Easter. Perth. Be there. Seeing all my Oz friends/family. And a bit of down time with Karen Miller beforehand. Nice.

March-April: Wandering off with my sister around the wild southern coast of Australia, camping out under the stars … ah. That’s food for the soul.

May 1st: Song of the Shiver Barrens out in the UK.

August: Worldcon, Denver, USA. My first US con. Sharing a room with pal Donna. First time in Colarado. Yay on all counts.

August, or maybe July. Or sometime in 2008 anyway. A very special wedding of someone close to my heart. Maybe in Hawaii.

August-September: Looking after gorgeous grandson over in Virginia.

The rest of the year is still up for grabs…but I reckon it’s looking pretty good from here.

How about you all?

I have a marked reluctance to read the second book of a trilogy if I haven’t read the first. It’s usually tough going, and sometimes just about impossible to make sense of what is going on.

Back in 2004, books 2 and 3 of my Isles of Glory trilogy were up for consideration for Australia’s Best Fantasy of the Year Aurealis Award. I know at least one of the judges for 2004 did not read book 1 (which had been shortlisted in 2003); perhaps none of them did. I wondered at the time if that was quite fair. It is hard to judge a story when you start a third of the way in…
Be that as it may, Book 3 was shortlisted for 2004. It did not win though.

I have just read a review of The Shadow of Tyr, book 2 of The Mirage Makers, written by a reviewer who has not read book 1, over at The Bookbag. [Spoiler Warning: don’t read the review unless you have read “Heart of the Mirage”!!]

Needless to say, she found it hard going to start with, but I was heartened to see that not only did she finish it, but by the end she could give it 4 out of 5 stars and write:

“I began to see just why Larke elicits the comments she does. Once I’d got embedded into the mindset and began to find my way in this world – which is closer to ancient Rome than the usual “mediaeval” setting chosen for fantasy stories – I did begin to care about the characters. In particular Arrant – the son who appears to be as flawed as Ligea feared he might be – and his interaction with the other that takes over his mind. By the end Larke had my emotional attention. Had I started at the beginning, as one should, I’d have enjoyed the whole much more [….] She can spin a battle-scene with the power of a mirage whirlwind, and capture the stunned silence in the aftermath of a massacre.“

That was a nice Christmas present.

The other day I was in the Borders Bookstore over at the Curve in Bandar Utama, and (as authors tend to do, alas) looked to see if they had any of my books. They didn’t, at least not in the fantasy section, nor in the general novels. So I asked an assistant.

Because there were two down as unsold in the inventory, a delightfully helpful gentleman then went to a great deal of trouble to look for them. He even emailed me afterwards to tell me that even a thorough search had not managed to unearth the missing volumes. So if you go there, you are unlikely to find “Heart of the Mirage” – but I can thoroughly recommend the staff.

And I am left wondering if folk have been stealing my books. (Come on, guys, you are supposed to pay for them, you know.)

And I have just received a box of author copies of “The Shadow of Tyr”, so that title should be in the bookshops here soon. (It is already on sale in the UK and on Amazon.co.uk. ) MPH in MidValley had a stack of “Heart of the Mirage” not so long ago and some should still be there. The store in Subang Parade also had it recently. I haven’t tried Kinokuniya but I imagine it’s there too.

So happy holiday reading everyone – and don’t forget, give books as presents. 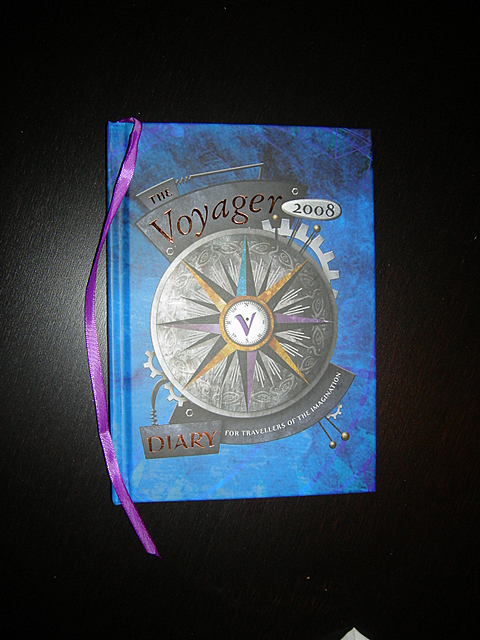 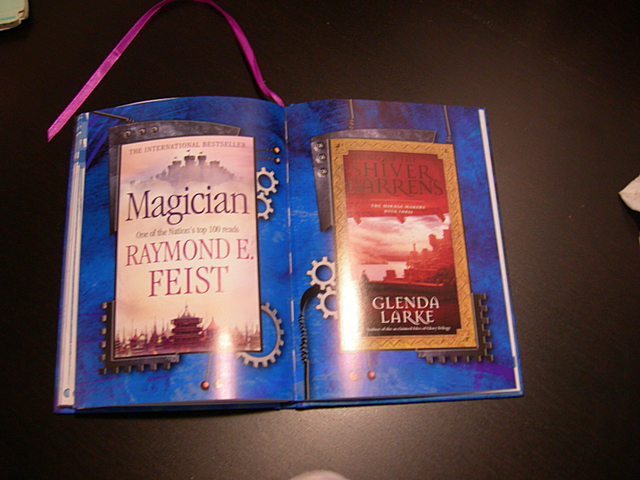 Ok, I admit it, I’m a sucker for ego-stroking. Having spent most of my life being cast into a shadow by the man I married, it is nice to be recognised in my own right.

And having a place in a 2008 diary, along with lots of other HarperCollins Voyager authors is, well, nice. Thanks so much to the Voyager marketing/publicity team.

How to get hold of the diary? Well, I hear it’s being handed out to Australian booksellers and sff fans who are supportive of Voyager (by buying lots of Voyager books?) , so if you fit the bill, look out for it. It is a fun production and tells you just how mad some of us authors are…