↓
Home Menu ↓
Skip to primary content
Skip to secondary content
Home→Blog→Blog→This has got to be the best moment of my writing career…
I WON THE SARA DOUGLASS SERIES AWARD
for THE WATERGIVERS aka STORMLORD trilogy
I don’t even know where to begin.
I am so honoured.
So chuffed. So breathtakingly amazed. Especially considering that the shortlist included Juliet Marillier, Tansy Rayner Roberts, Michael Pryor, Marlina Marchetta and Rowena Cory Daniells. 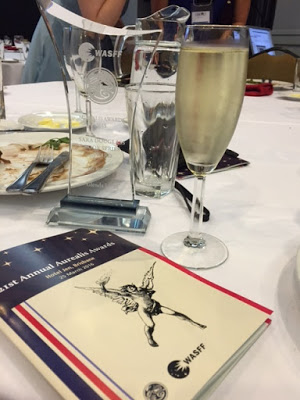 Unfortunately, I couldn’t be there, owing to the arrival of a brand-new member of the family in New York, but I was prevailed upon to write an acceptance speech just in case, which you will find at the end of this post. It was delivered for me by a fellow writer, Donna Hanson (above), at the Aussi Natcon 2016 in Brisbane. And I believe there were celebrations…see photo left.

There were a lot more things I could have said in the speech — how much I owe to the then Voyager Australia editor, Stephanie Smith, for example. How much I owe my beta readers for making me a better writer and making those three books better works. How much I appreciate the work put into the awards by the Australian Spec Fic community and the judges.

But here’s what I did say:

When I first read Sara Douglass’s Battleaxe back in the 1990s, I was blown away, not just by the story, but also by the idea that an Australian author could publish a fantasy novel worldwide and find acclaim on a world stage.
At the time I was looking for a publisher for my first book — and Sara’s success was an inspiration. And of course, Battleaxe was just the first of long line of Sara’s groundbreaking novels.

I was delighted to hear that a series award was being created in her name, to acknowledge her pre-eminent position in Australian speculative fiction history. The fact that judges had a massive job of reading the number of series up for the award is a tribute to the present health of Speculative Fiction writing in Australia, a wave of creativity of which Sara was the forefront.

To have been short-listed by the judges for the inaugural award was a breath-taking compliment. The other works on that list are so impressive that I certainly don’t believe, as I write these words, that any work of mine could win. I just love the validation of being on the shortlist though, and I thank everyone involved.

Most of all, I wish you were here, Sara, still with us and still writing.