The following photos are all from Langkawi Island. The resort we were staying in has a floating boardwalk a short distance into the mangroves (seen here at low tide). 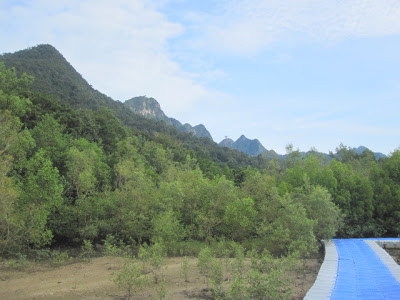 Some years ago I sent six months working on a mangrove project, living in the heart of Johor Baharu in an old colonial house overlooking the Straits of Malacca — except if I was in the field, when accommodation varied from sleeping on cement floors being bitten by sandflies to hotels directly over a Chinese coffee shop, and much of my day was spent in boats poking around in some of Malaysia’s remotest streams and estuaries. 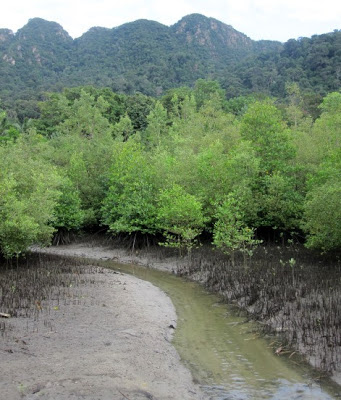 One memorable day when we tried to walk through one of Malaysia’s oldest untouched mangroves to find the southern most family of gibbons in the Peninsular. No one had known those animals were there until we heard them; the scientific books and papers said white-handed gibbon territory did not extend that far south. (I imagine they don’t exist now, a few short years later — I suspect the area has vanished under the all-encompassing “development” greed of man, and the gibbons died, or were captured. They were not in the mangroves, but isolated on a patch of higher ground forest. ) 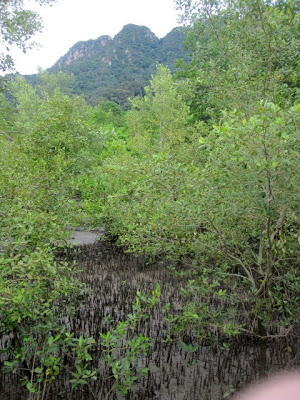 Unlike these flat seaside mangroves, an old grove can be incredibly rough going, with lobster mounds two metres high and drainage rills two metres deep – climb, descend, repeat, climb, descend, repeat. The trees were huge things, gnarled beyond description with interlaced roots — a cat’s cradle of wood. To set foot on the gluey grey mud that would suck your boots off in a second, it was necessary to balance on this lacy network of grey goo-slippery wood below and haul on the tree branches above. All lugging cameras and backpacks in near 90F heat and 100% humidity.

It took us over an hour to go less than a kilometre, which is when we decided to give up (given that getting trapped in there by the tide might not have been funny.) It was easier for the men involved — they were 6 footer lanky Danes, with long legs, and twenty years younger than me… 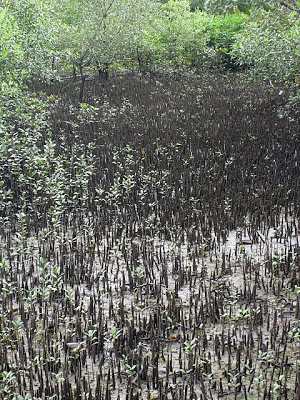 What surprised me most was how astonishingly beautiful mangroves could be. And how alive with life.  Note the roots poking through the mud above, a case where roots grow up to aerate themselves. 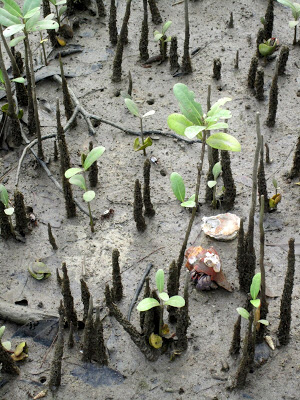 And (above) in among the roots and the new saplings, a hermit crab with his shell adorned with the remains of other dead shellfish. 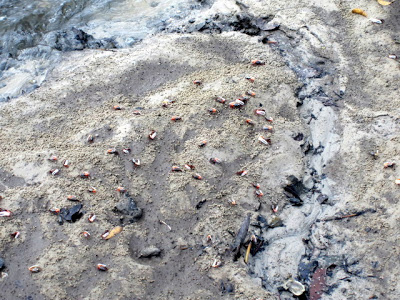 And what about these, above — fiddler crabs. Each male has developed a single claw much larger than the other. Its purpose is pure aggression. It can’t use it to feed itself! Below there’s one guarding his hole. 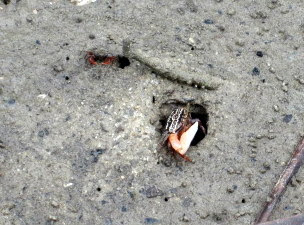 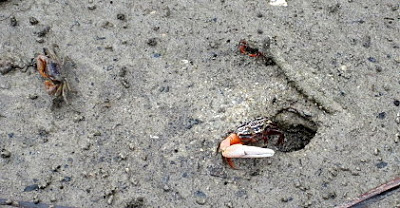 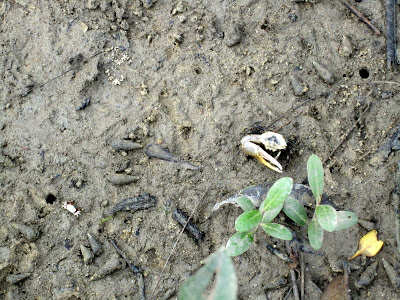 Note all the other types of shellfish lying around, waiting for the tide to come back in. 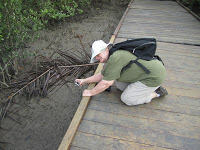 And me — taking a photo 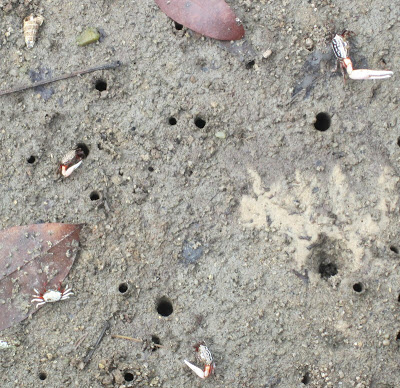 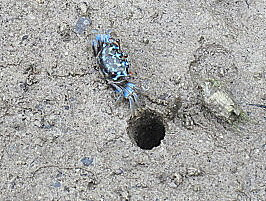 And here, a lovely blue crab with pretty markings.
The sounds of the mangroves are incredible — pistol prawns snapping, all the clicking and scuttling underfoot, and the birds – Brown-winged Kingfisher calling, the slow flap of a dark morph reef egret, the singing of tailor birds and orioles and fantails…