When I was kid, I remember a book I had, written in verse, with delightful drawings, about a farm family in Australia. Now I have idea who wrote or illustrated it; in fact, what I chiefly remember about it is something I accepted absolutely as a child. Instead of having the four seasons in it as per a European or American type book, it had the four seasons à la Australia: flood, bushfire, drought and … finally … a good season when things weren’t flooded, too dry or on fire. Oh, how true that is in so much of farming or station country.

Here are some more photos from my sister Margaret’s trip to Lake Eyre and inland South Australia. As any country-born Ozzie will tell you, there aren’t too many bridges in that part of the world. 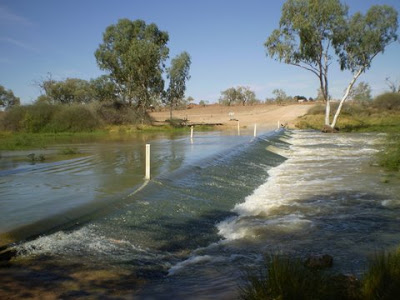 But there are lots of ravens and some crows. This lot, believe it or not, are fishing. Which is not something they get to do all that often, because the river only runs rarely. Still, once a fisherman, always a fisherman? They were getting fish as long as 15 cm (6″). This is Cooper Creek at Innaminka 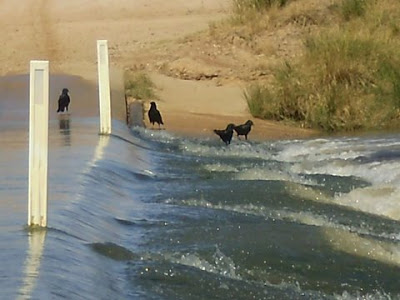 And here is Lake Eyre. Margaret said the Lake Eyre Yacht Club were still waiting for the water to arrive – and below you can see the water as a faint blue line on the horizon and the salt was a bit soggy. 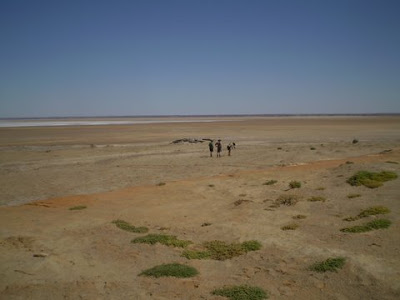 Note the bay below. Ok, so the water’s a little on the low side as yet. It takes six weeks to get there from where it rained, at about 30 kms a day, and the lake was still filling up when my sister was there. When it is so shallow, a shift in the wind can send all the water to one side and leave miles of mud exposed…
Usually it fills up only about once in 50 years or so, when it can be 4 metres deep (14′). And it is a tad on the large size. Almost 9000 sq.kms. That’s 3,400 sq miles. Once full, it takes years to dry up again. The water doesn’t run out. This is below sea level and there is nowhere to go.
Just look at those cloudless skies. 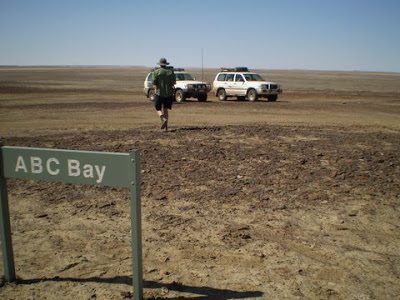 They spent a night camped on a channel of the Warburton River at Cowarie station (in cattle country, Australia has stations, not ranches) where the water was moving at 20 knots. There’s a really interesting video about what the water means to the station owner – a woman – here: