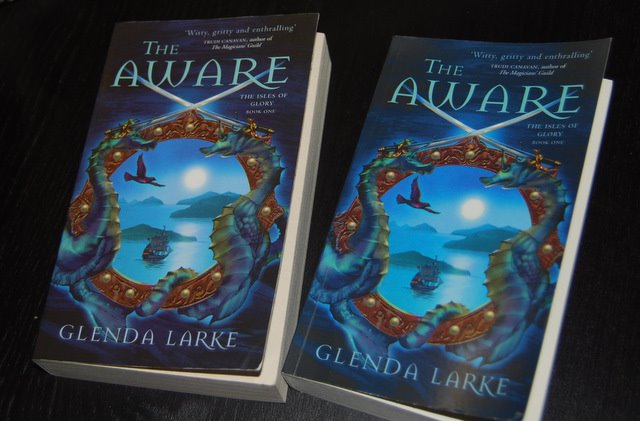 Catch up housework day. On the lounge room spring clean. Discovered two enormous lizards behind one of the bookcases (after I’d emptied and moved the bookcase.) Not the usual wall geckoes, but the Spotted Gecko that makes messes that you don’t want to know about. Dunno what on earth they find to eat there. Also discovered that one bookcase was ruined underneath in the waterfall flood (aka roof leak) a couple of months back when I was raptor watching.

Then postman came and brought 2 copies of a new print run of The Aware. Yay! (this by the way is the time-honoured way of finding out that your book has gone to reprint – when you receive copies.) Now as I was only told about the last reprint back in February, I am really chuffed! And even better – they have done the cover with a lovely shiny finish instead of the matt one they used before. Oooo, nice. Love you, Voyager Oz!

If you look carefully at the photos of the book above, you will see they aren’t quite the same. The one on the left is the old version(s), and the one on the right is the new version. It is so spiffy! Shiny cover like a duck’s back that does justice to the lovely Jeff Bridges cover, whiter paper and although it has the same number of pages, it it more compact (see the thickness difference?). Wow. Wonder what I did to deserve that. But it’s just lovely that this book, published in 2003, is still selling so well.