Ask the average Malaysian what animals we have and he could probably say elephants and tigers and monkeys. He might even mention orang utan, although he could well be a bit vague about whether they are found in the Peninsular, or just in Borneo. Ask what type of monkeys, and many Malaysians would look at you blankly.

The other day I had to tell my 2 sisters-in-law, both over 50, that the little creature so common in all Malaysian gardens and kampungs is not a squirrel but a tree-shrew. It’s not even a rodent, as squirrels are. It’s active throughout the day and will even enter your house if it’s quiet enough. And yet they could not distinguish it from a squirrel – didn’t even know there was such a distinct creature. 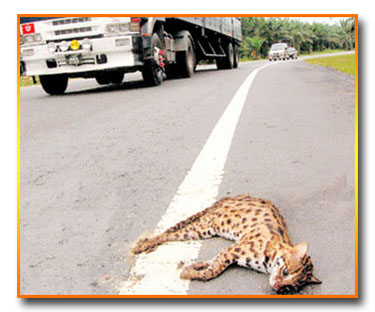 Don’t believe me about how clueless most Malaysians are? Look here (in Malay) for the Kosmo news page, from which I pinched the pix. Kosmo, and at least one of the daily English language newspapers, has not a clue what animal they are talking about. They speak of a Spotted Leopard cub.

And yet this is the most common of all our wild cats. It is Leopard Cat – not a Spotted Leopard (or Black Panther which is the morph of the Leopard most commonly found here in Malaysia). And it is an adult, not a cub.

That’s right. These folk – who are informing the public, mind you – reckon this is a baby of the rare leopard which grows to a length of over 2 metres (7 feet) if you count the tail, and is usually black here in Malaysia. When actually it is a fully grown leopard cat, relatively common, which is a only bit bigger than a domestic puss.

In all my years in Malaysia, I have seen one leopard (see here for the encounter and a pix), and countless Leopard Cats. Go out into an oil palm estate that borders a bit of forest at night with a spot light and you practically trip over the things.