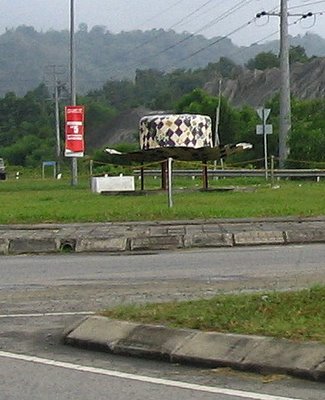 I’ve already put up a few of these. The lobster in Sandakan came close to being the worst, I reckon. Jennifer Fallon had some success at finding some wonderful monstrosities in Australia, too. Try her blog entries for November 2006.

Before you read any further, take a good look at this pix. What do you reckon it is? A crumpled up chessboard? A piece of modern art made of scrap metal? Discworld on the back of Great A’Tuin upsidedown? Noah’s ark as it might appear to an artist under methadone treatment?

I reckon anyone would be hard put to find one as, um, boringly unattractive as this one, found between Kuala Penyu and Papar in Sabah. I suspect it is supposed to portray the local version of a panama hat. Either that or a rather odd cake on a plate.

And whoever commissioned a sculpture of a panama hat needs to be banned from ever being involved in any kind of landscaping decisions for the rest of their life.