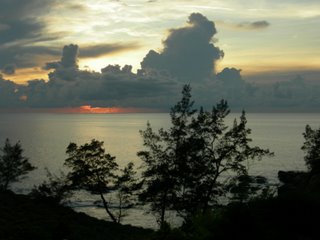 Our house back in the Peninsular has been broken into. Or rather the garden has, twice. Hopeful thieves indeed. (Are they crazy? I reckon ours would be the only house in Malaysia where thieves would enter, take a look around and then leave in disgust at the lack of disposable wealth…except for books. There are lots of books.)

Anyway, said thieves laboriously cut their way through our fence into our garden, twice, only to be foiled by the very loud alarm system on the house itself, plus our long suffering neighbours who have to go and see what’s up.

Well, I actually suffer too. One day I received 102 calls on my mobile – my desperate house trying to tell me something was wrong … and that time it was only a cat.

My mother lived from 1903 to 1997, in Australia. To the best of my knowledge she was never robbed, never had her house broken into. Our house there never had the back door locked during the day, even when we were out, and the yard had no fence. We left the milk money on the front porch when we went to bed. It was NEVER stolen. Not once. (Not sure when that practice stopped).

My daughter’s house in the USA has doors made of glass. And no alarm system.
And no fence. And it’s empty all day long. And they have never been robbed. Yeah, that’s right, in crime-ridden US of A.

Our present house in KL has been burglarised, or has suffered attemped burglary, something like seven times in 20 years, and we live in a quiet suburban area with mostly academics or university staff in a country where we are repeatedly told Asian values are terrific.
And that’s not counting the houses I lived in prior to this one. I have had my bag snatched while at a petrol station. The car has been broken into 3 or 4 times.

There have been 70 murders in the Klang Valley (that’s Greater Kuala Lumpur) so far this year. Ye gods.
One in every 100 people is a drug addict.
(All these figures have been in the newspapers recently.)

And Malaysian police get paid anything from around 1,200 Rm for a constable to approx 4000 Rm for a senior ASP a month (divide by vaguely 3 for the AUD and by 4 for USD). And the US film “Assault on Precinct 13” was banned for – wait for it – excessive violence? Nope. Because it showed police corruption.
To be fair, there are recent rumblings about “how we must pay our police more”.

What am I trying to say? Dunno, really. You go figure.