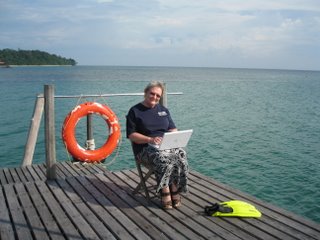 One phrase my first beta reader caught in passing is “He dropped his eyes.” She hates anyone using the noun eye/eyes when they mean gaze or look. “Did they bounce?” she asked.

Now, I will admit that I used to have no problem with the phrase. I reckoned using “eyes” in this way had passed into legitimate usage. We do say, for example, “Catch his eye“ or “Keep an eye on” or ” Run your eyes over this” or “Cast his eye in this direction” without the reader immediately having visions of playing ball with eyeballs or using them as worry beads.

So, tell me, can a writer say “He dropped his eyes” or “His eyes followed her” without the reader cracking up?

(Of course, having pointed this out to all of you who have never thought about it before, I have ensured that none of you are going to be able to read the phrase in the future without going “Eeeewww”.)

So, will my hero be dropping his eyes in my latest book?
Nope. He will drop his gaze, and keep his eyeballs firmly in their sockets.