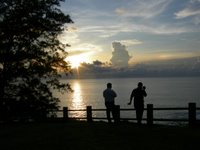 The other day I had a post on books “restricted” in Malaysia. Today there is an article in the New Straits Times newspaper on film censorship. Here are some of the things that get snipped:

Copulating animals. (Oops. Should I take down that post on alien sex?)

“Swinging an arm upwards and pointing a middle finger towards heaven”. (Hmm. That’s odd, I had no idea the gesture had anything at all to do with heaven.)

Scenes and dialogue with direct reference to sex. (Immaculate conception anyone?)

Native women with exposed breasts. (When I first came to Malaysia, it was easy enough to see such women – but alas, they have now been carefully taught that their “national costume” is obscene.)

Anything to do with homosexuality. (Brokeback Mountain was banned outright. “Homosexuality is not something we allow in films here” says the chairman of the board.)

Munich was also banned. Says the chairman: “(It) portrayed violence, terrorism and the Israelis.” (Excuse me? Israelis?)

The censorship boards consists of retired government servants (possibly all men?). I have told my husband he should apply for a job there when he finally does retire. I mean, what better way to spend one’s day that watching movies and then debating all the naughty bits? And perhaps replaying them over and over, just to make sure you’ve got your decision right?