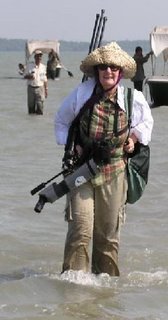 I hate sea gulls. They are born with one plumage and tend to look like every other species of gull when they are young, and then they spend anything up to five years getting to be an adult, looking different each year. It’s quite possible for them to have a first winter tail and second year wing patterns. And then, when they are adults, some of them cross breed just to confuse idiots who want to go look at them. I swear, they set out to deceive and the word gullible can’t be a coincidence. Only that’s a word to describe the birdwatchers trying to identify the gulls, not the gulls themselves.

I don’t have a photo taken this trip, but here’s one of me in the same area, heading towards a mud spit. Photo taken by Wetlands International (M).

So what the hell was I doing on Saturday out in the middle of the mud and mangroves, looking at a blasted seagull?

Because those guys from Wetlands International here reported a new species for Malaysia: Heuglin’s Gull, which breeds in northern central Siberia. I believe there will be some photos in The Star newspaper tomorrow.

Anyway, on Saturday six of us headed by train to Port Klang, then to Pulau Ketam (Crab Island)
by vaporetto ferry (decorated inside with plastic greenery strung down the ceiling, yet with splashes of red paint all over the windows no one had ever bothered to clean off – like the remains of a collision at speed with a flock of Heuglin Gulls…?)

After that, it was a locally-made speedboat for a ten-minute ride to the southern mudflats. Where the boat got stuck on the mud on the falling tide. Not that we minded: we had great views of Chinese Egrets in a selection of breeding and non-breeding plumages, plus waders fussily scampering up and down the edge of a mud spit, and terns flying past, elegant as always.

Then, after a couple of hours two things happened at once: the tide came in, and the damn gull came and sat on the mudflat. Our boat floated off, swinging around in all directions while six birdwatchers with telescopes tried to focus on the same bird and keep out of each other’s way. Chaos and curses. A couple of us abandoned ship, thinking to get a more stable view from standing on the mud, and ended up thigh deep in quickly rising water. Ok, so that wasn’t a brilliant idea after all. And of course, then the bloody bird flew off.

We consoled ourselves with a fish lunch on Pulau Ketam. If there had been sea gulls on the menu, I would have been tempted to order…

So, if you happened to be in K.L. Sentral on Saturday, and saw a disreputable group of muddy, wet people lugging tripods and optics as we dispersed to catch trains, that was us.

Back home it was time to look at the field guides and internet pix, and try to ID the gull. Ha. Whaddya know, it didn’t look like any of the pictures. Gulls never do.