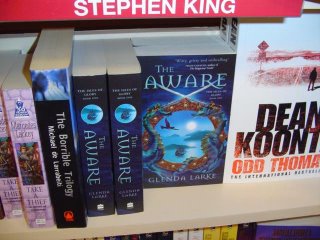 The first is that I enjoy reading less. The second is that I don’t have much time to read anyway. And that’s tough for someone who started reading so young she can’t remember how she learned.

There was no T.V., of course, and we lived in a household that “went to the flicks” much less often than we visited the dentist. The only library was at school, and books were rationed like wartime coffee. We were allowed to change a single book once a week. (Perhaps it was reverse psychology on the teachers’ part – to inculcate a love of reading by making it an almost forbidden treat? If so, it worked. Reading was a wonder, a joy, and a new book was indeed something delicious to be savoured. Of course, being kids, we bookworms got around the rationing. We each took out one book, read it and passed it on.)

The second downside to being a published writer are those things called deadlines. Terry Pratchett might get a kick out of the sound of them whooshing past, but all they stir up in me is a sense of guilt whenever I sit down to read. I feel like that same little girl who used to read under the bedcovers with a torch, long past her bedtime, devouring the Myths of Greece and Rome, or one of Enid Blyton’s Famous Five books, or The Complete Plays of George Bernard Shaw – probably all in the same week. I didn’t discriminate back in those days. I just read.