When I started down the road to being a published author, there were times I wanted it so bad it was a physical ache. I would carefully calculate exactly how long before I could expect to hear back from the publisher/agent I had sent a manuscript to, and then wait by the letter box. Back in those days, all I wanted was to be published. That was all. That would be the pinnacle. After that, everything would be a sparkle in my eye.

Ha. Then I got published. And I found out it wasn’t all I wanted. I wanted to be other things as well: a commercial success, to be sought after. I wanted to be receiving paeans of praise from my peers. I wanted loads of wonderful reviews. I wanted the moon… 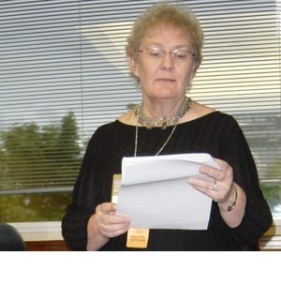 Giving a reading at Worldcon Glasgow 2005

I was lucky; for a while there, it seemed that I might actually get it. Reviews of Havenstar (my first book) were excellent. STARBURST magazine gave it a 10/10 rating. It got on to bestseller lists. And then it vanished from sight and the bubble popped.

And here’s the uncomfortable truth: getting published is the world’s greatest rush, but things often go downhill from there, not up! It was another five years before I had another book published and I never have got back into the UK market. I’ve sold to Australia, USA, Germany and Russia, but not to the UK. And that’s another lesson the naïve writer learns : there’s not much that is logical in the business of publishing.

After that first heady publication, after you have recovered from the choked-up joy of holding that shiny new book with your name on the cover, you start to worry yourself sick (or at least I do) about things like: will people like the book? Will it sell? Will it earn out? Will it get reviewed? Will I get another contract? Am I going to get writer’s block? Will I finish that next book in time to meet the deadline? Will the next book be as good? What about the one after that? Will it get nominated for the Aurealis shortlist? And if it does, then you start worrying: will it win?

(At this stage, any unpublished writer reading this is going to be thinking: what an ungrateful prat!)

Possibly it’s all part of the human condition to never be content. Or maybe it’s just megalomanic me.

Some of what we worry about has validity. Writers do get dropped. Or publishing imprints do fold (see what happened to my Havenstar just when it started to fly). Books do fail to sell – even the good ones.

And maybe, just maybe – because I will never be content, my writing will get better and better as time goes by. That’s the theory, anyway.