Last week, Rowena Cory Daniells tagged me to write a post about my “next big thing” by answering a number of questions.

Which presented me with a problem: I certainly have a next big thing coming — my next trilogy, but I don’t really want to talk about it, other than saying the first book, The Lascar’s Dagger, is finished and the second book is started … But to be published by whom, and to be out when, is not settled yet. Let’s just say, discussions are ongoing.

So I am going to talk about my immediate thing, which for you may be BIG or not — depending on whether you have read Havenstar, or not. So here goes. 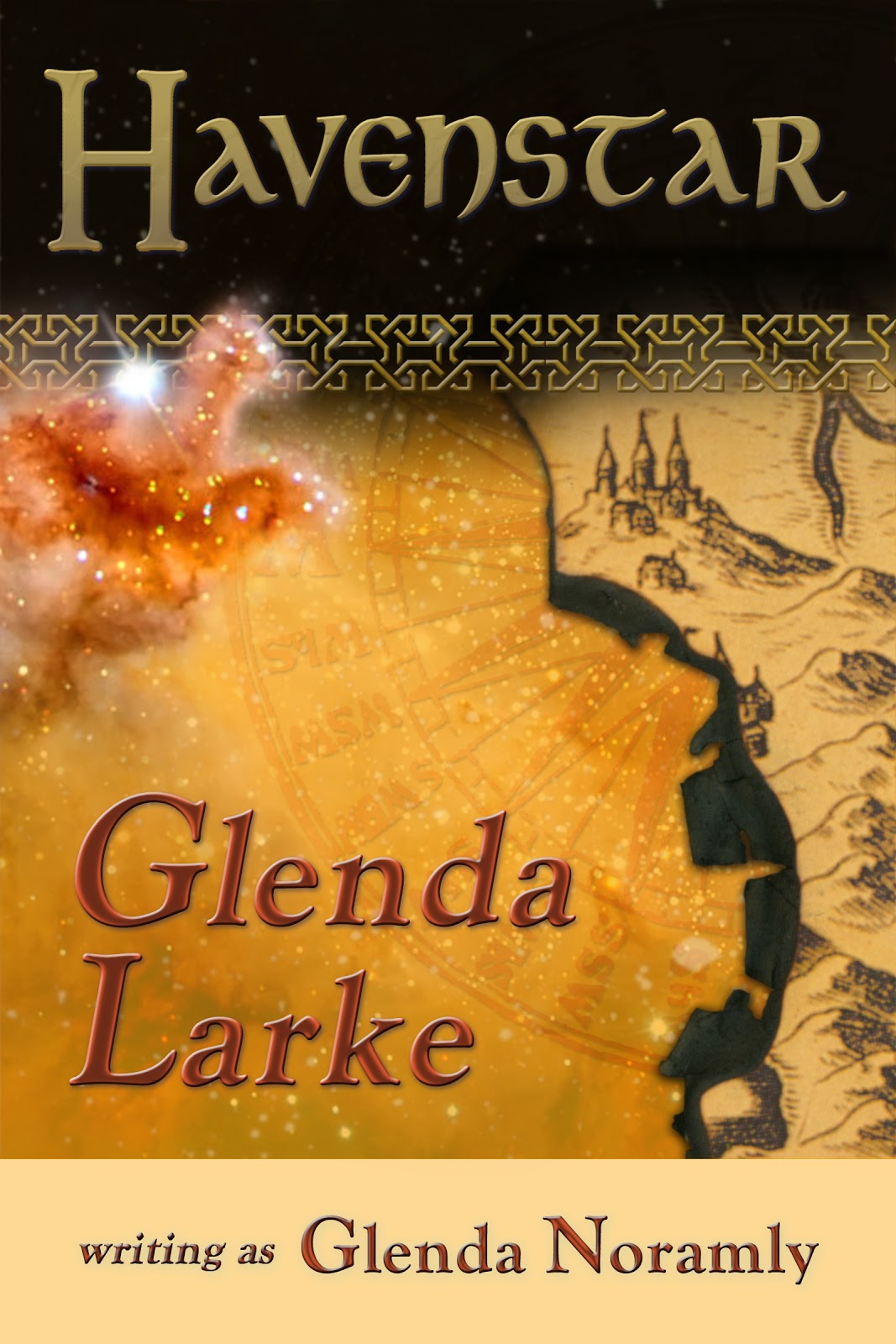 1) What’s the name of your Next Big Thing?

Well, it’s actually an old thing big thing. A stand-alone fantasy, Havenstar, that was first published in 1999 in the UK under the name of Glenda Noramly, and which was soon out of print because the Virgin sf/f imprint folded. (Yes, that Virgin. You didn’t know they published books, did you?) Havenstar was also published in German and Russian.

As a very new author at the time, I found it hard to figure why a book should wend itself up to 81 on the general Amazon best seller list (of all book types) only to be out of print the very next day…  Talk about from supreme happiness to despair in 24 hours! (I know better now — weird stuff happens all the time in the world of publishing!)

2) Where did the idea come from for the book? 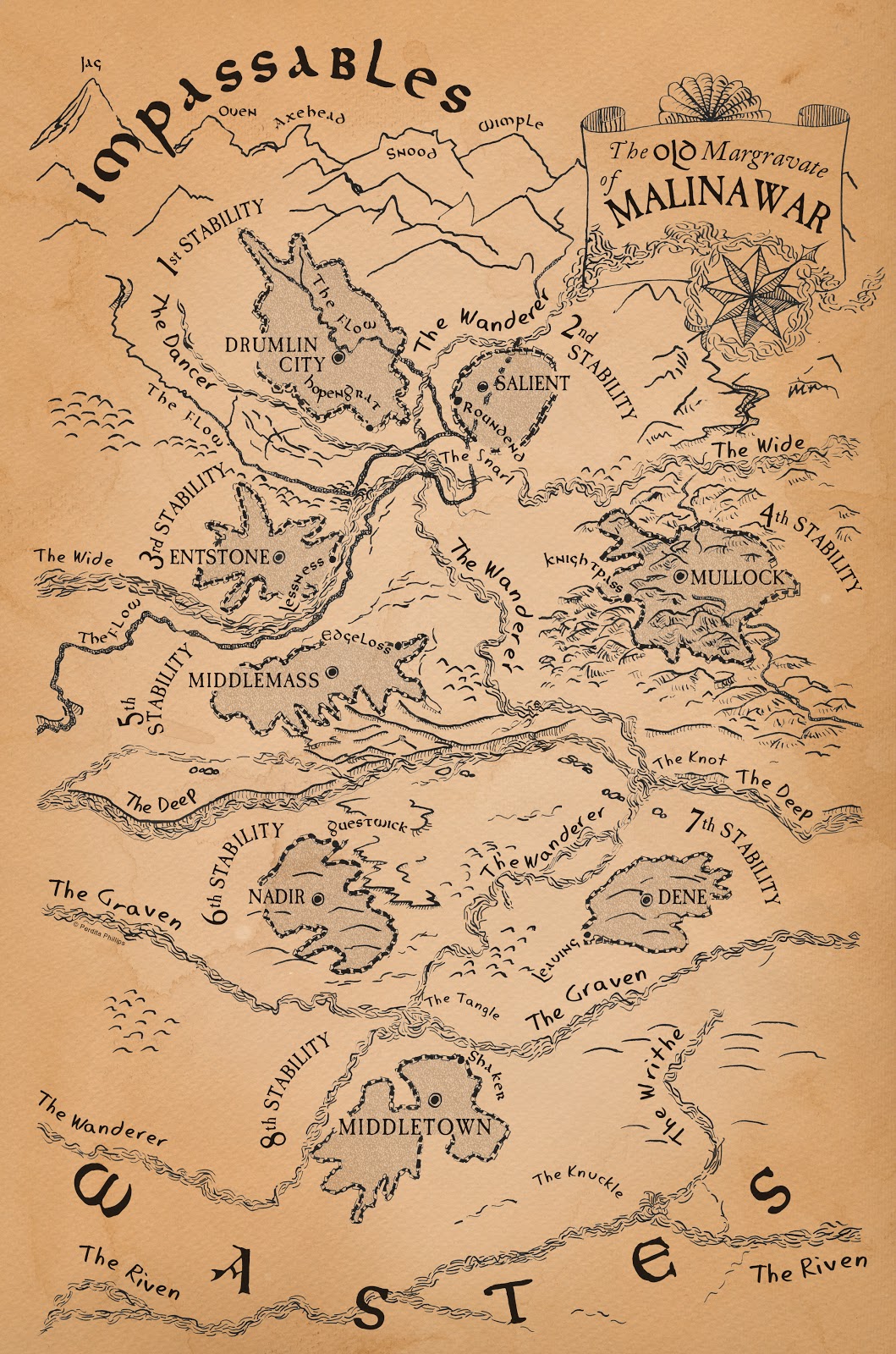 Long before the days of GPS or Harry Potter, I had a conversation about how cool it’d be if you could look at a map in the car and see what was happening on the ground in real time — and dodge traffic jams, accidents etc. And my niece, the same one who did this map for Havenstar, said, “That’s an idea for a book…”  Which is kinda like waving a sardine under the nose of a starving cat…

3) What actors would you choose to play the part of your characters in a movie rendition?

I wouldn’t. I think the great glory of reading a book instead of seeing a film is to imagine everything yourself. So go read Havenstar and imagine!

4) What is the one-sentence synopsis of your book?

Do you really want me to reduce a 160,000 word novel down to one sentence? Go read it instead! Oh, all right. It’s a book about a mapmaker. And magic maps. And the looming end of a world. And … ah, see? I can’t.

5) Will your book be self-published or…?

I am self-publishing it as an eBook. With help from my friends (thanks Patty and Rowena for advice, Jo for helping with the copy editing after I made a mess of it, Perdy for art work and gorgeous map) of which you can see a clearer version here.

6) When will
your book be available?

It is available already. You can buy it at here at Smashwords. Just scroll down and click on the title, pay and download it straight onto your Kindle, Nook, Kobo, Sony reader, iPad, iBook and just about any app you care to name! It’s also already up for sale on the Kobo site and will eventually turn up on Barnes and Noble sites too. I am in the process of putting it up on Amazon as well, but it will take a few more days for it to go live.


You can also buy a paperback version for $US486, brand new on Amazon.com (or so they say!) …but believe me, I won’t see a cent of that, and I’m not sure you’ll ever see a brand new book either, seeing as it has never been reprinted.  (Prices have been crazy for Havenstar ever since it became unavailable.)

7) Who or what inspired you to write this book?

I don’t need specific inspiration to write a book! I was born wanting to write books…


8) What else about the book might pique the reader’s interest?

It’s a book for those who love traditional fabulist stories — it has all the tropes of the very best fantasy: a fellowship of unlikely companions, going on a journey, a land under extreme threat, a Dark Lord and his minions, adventure, tormented heroes, unlikely heroines, adventure, battles and unexpected twists and turns. And a love story, of course. And no, even though it has all those things, it’s not at all like Lord of Rings.

I guess the other intriguing thing about it  is how many people have told me they have re-read it multiple times. 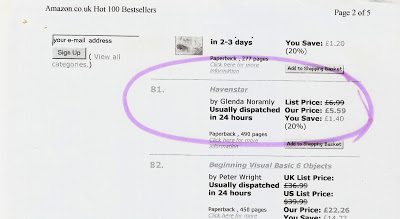 And here for your amusement (its preservation showing just how obsessed I was with ratings at the time) is Havenstar at 81 on Amazon’s bestseller list, beating Visual Basic 6 Objects by Peter Wright…
Tom Clancy was at No 78 and 79, while Sword of Honour by Alexander Kent came in at No 80…

(I wonder if it was possible to take screenshots back then? I just printed it off…ah, how things have changed!)