↓
Home Menu ↓
Skip to primary content
Skip to secondary content
Home→Blog→Blog→An odd sort of day…
On a scale of 1 to 10, with 10 the best…

I’ve scored another Aurealis Award shortlisting! That makes my sixth. I think I shall give up the idea of ever winning as I doubt it will ever happen; it’s much more fun to collect lots of “finalist” logos.

You can see the whole finalist list here. For the Best Fantasy Novel of 2010, Stormlord Rising is up against a book by previous multiple winner, Juliet Marillier.
And against a novel that has been nominated for TWO chances at an Aurealis, by Trent Jamieson.
And against a superb novel by Tansy Rayner Roberts which I absolutely loved and wouldn’t mind losing out to.
And the fifth is by someone I’d never heard of — but I sure have now. I rather think this is the first time a novel that has been so far entirely self-published has been listed for an Aurealis, so that’s lots of kudos to Andrea K. Host for a start. Congratulations to everyone!

So one way or another I reckon I won’t win this time either — but who cares? I’m collecting those logos! Thanks to all the organisers and judges. I love you guys.

At Number 9:
Was sitting in my lounge room for half an hour putting the hooks back in washed curtains and counted the wild birds I could hear: Asian Koel, Yellow-vented Bulbul, Oriental Magpie Robin, Scarlet-backed Flowerpecker, White-vented Myna, Common Tailorbird and Red Junglefowl. Seven species in my garden in half an hour. Made a difference to a tedious job. (Ok, so the junglefowl is technically on the slope on the other side of my back fence…)

Hey they finally activated our smart card for the satellite TV decoder!! It only took 5 weeks. Or was it 6? I kid you not. It was so long, I can’t even remember how long. So we now have TV again after…um…maybe 5 or 6 years. Can’t say it worried me over much, but hubby was missing the news…

My husband sent me an email with the subject line: “SexVideo”.  He’s never done that before, so I scrambled to open it…..but alas, no video clip attached. Just news of more politician shenanigans that everyone is getting heartily sick of here. Sigh.

A palm tree crashed across our driveway and took what looks to be half the garden with it. Sigh.

At Number 1:
I still have not broadband connection. Of course, it’s all my fault.
I forgot to pay the bill.
It’s been paid now, but reconnection takes time. Dail up is soooooooooooooo slooooooooooow.

The tailorbirds had nest and young wiped out. Not sure why. I heard the female alarming hysterically, went to see what was happened to find the nest was torn apart or had fallen to pieces. There was no sign of the young. There were cats around, alas.
Later on the male kept coming to the area with food, looking for them. Sob. 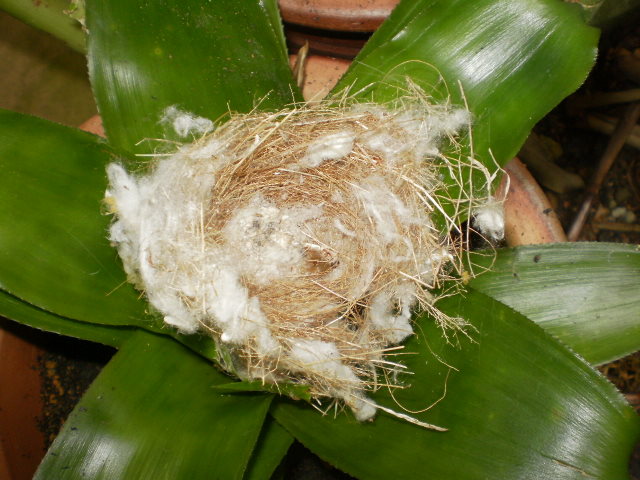 This is what was left of the inside of the nest: 3″ across, after it had fallen into a flower pot. The white bits are kapok from a nearby tree.