Some of you may not know that my husband was, for over 6 years, a Deputy Director-General of the UN International Atomic Energy Agency in Vienna, under Dr Hans Blix. 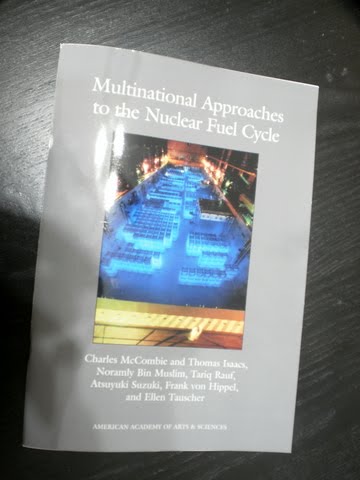 He has just had a paper published by – no less – the American Academy of Arts and Sciences. It’s in a publication entitled Multinational Approaches to the Nuclear Fuel Cycle. The paper is titled: Possible International Fuel-cycle Arrangements Attractive to States during the Nuclear Power Renaissance.

This year so far he has been invited to two different high level international meetings overseas on Nuclear Energy, one as the keynote speaker. In other words, he kinda knows the business. (And, you might sense, I am very proud of him.)

Here in Malaysia, there has (sort of) been an announcement that Malaysia is going nuclear. And the fun has begun. For example, here is a report from yesterday’s The Star newspaper (7th May) paraphrasing the Chief Minister of the state we live in, Selangor, as saying Selangor will not allow the plant to be built in the state because his govt believes the use of alternative energy sources such as solar energy should be enhanced instead, etc etc.

Other response was equally moronic and uninformed, public and politicians pontificating on things about which they know nothing. And not bothering to find out.

Selangor State has every right to refuse to have the power plant within its boundaries, of course, even though they are the major power consumer of the country. But one wonders – have they done the arithmetic? Looked at the projections? Future trends and costs and pollution indices?
The Chief Minister is our political leader. It is his job to lead, i.e. to know the facts and think about things and make informed decisions. People with the expertise like my husband are just a phone call away.

If the Chief Minister knows of some way that solar power can be used to match the needs of his state in ten years time, why doesn’t he tell the rest of the world? Selangor could make a world-wide financial killing! We’d all be rich! Malaysia solves the world’s energy problems with the wave of their magic solar-powered wand!

You know you don’t have to be a nuclear scientist or an engineer to understand the severe limitations of solar energy. It’s simple enough. Just do some reading. Many parts of Australia have desert temperatures, ample unused land and blue skies (unlike Malaysia which has heavy cloud cover). Ask yourselves then: why don’t they have solar-energy power plants?

This blog post, btw, is all my own work. My husband does not write or influence or suggest the topic for my posts.
.