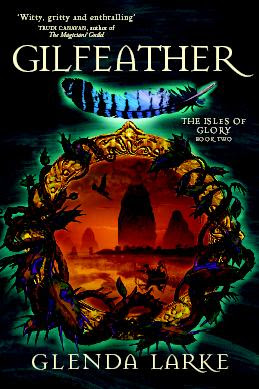 Remember I mentioned that these lakes were the inspiration for one part of Book 2 of The Isles of Glory? The Australian cover depicts the lake as it is portrayed in the book.

Here are a couple of paragraphs.

In this first extract (slightly abbreviated) the narrator is Blaze Halfbreed, as she and her friends pole there way towards their destination, an island in the middle of the Floating Mere :

At first glance, there seemed to be a solid wall of plant growth in front of us, a boatman’s nightmare. They grew in clumps, each about the height of a man. We later found they could grow four times as high. Each clump had a barrel-like central core that sprouted stems on which long narrow leaves grew in spirals. Each yellow leaf was thick and solid, edged with a rim of green that sported nasty hooked spines, and each could be three or four paces in length. About three quarters of the way up each leaf the leaf-spike folded over and drooped downwards as if it couldn’t support its own considerable weight.

As our craft made ripples on the water, the clumps stirred. When I looked down into the blackness of the tannin-stained water, I could see their thick roots spreading out, tangling with one another, forming rafts, catching their own dead leaves to use in self-cannibalistic nourishment. Fortunately for us, not all the clumps joined. They were floating islands, rafts varying in size from three or four plants to sizable platforms that stretched for several hundred paces. You wouldn’t have wanted to step foot on any of them though: the leaves sprouted out in all directions, each one lethal in its arsenal of spines.

Under different circumstances, I might have found the Floating Mere beautiful. In the occasional clearing in the pandana, the blackness of the open water reflected the plants and sky with mirror-like clarity. The plants floated, serenely peaceful considering their weaponry, and the waterways twisted and slithered blackly between them, like forest paths heading into the depths of some primordial jungle. Sometimes the plants met overhead and the paths became tunnels that undulated gently as we passed through. It was as if it was all one living creature, observing us neutrally as we slipped by.

I wasn’t sure that the place was entirely benign, though. Occasionally we heard strange sounds, eerie song notes that seemed to have no pattern or even discernible origin. They would whisper through the pandana and then die away as mysteriously as they had started. Perhaps unconnected, every now and then something would rise up through the water to break the surface, and I would have a momentary impression that I was being watched. When I turned my head, I’d have the briefest glimpse of something large and of an indeterminate colour, before it slipped beneath the surface, gone in a swill of ripples.

I couldn’t help feeling that we were being followed.

Followed, or hunted? I tried to tell myself that anything that was so skittish was not going to be much of a threat to us, but I didn’t feel comfortable.

The second extract later in the book has a different narrator, Kelwyn Gilfeather, a physician, who is trying to find out why Blaze and her party have gone missing:

There was more that was eerie about this floating world: sometimes we were poled through tunnels for half an hour or more, twisting pathways of black water lit only by sunlight shattered to splinters by the thick network of barbed leaves. Sometimes the tunnels split into branches, then rejoined, rather like a network of arteries and veins and capillaries. Even more disconcerting, sometimes it closed up behind us, as if the floating plants were trying to block our retreat. A silly notion, I know; the islands moved only because we stirred the stillness of the water with our passing.

Probably the feeling was aggravated by the strange noises of the place, dissonant whistles that seemed to seep out of the water on every side at odd intervals, akin to the music a wind may make playing around the corners of a building. I might have dismissed it as nothing, except that there was no wind, and occasionally the notes seemed more …deliberate. Like language. Only who — or what — was speaking? And to whom? 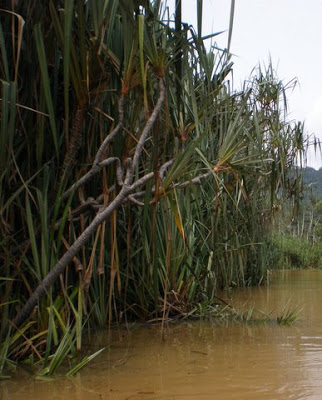 The Isles of Glory trilogy can still be bought from Australian bookshops as all three books are still in print. They can be obtained by overseas readers through Australian bookstores such as the book chain Dymocks, or specialty bookshops such as Galaxy in Sydney or Slowglass in Melbourne.