Worked well for 100 years or so, and was charming. One stopped and had tea at the resthouse (called The Gap) at the bottom gate while waiting for the time to go up…all part of the Fraser’s Hill experience. From what I have heard, the locals who lived on the hill didn’t want another road.

Some twenty years ago, someone had a bright idea that Fraser’s Hill needed another access road. (Who knows, he might have had an eye on all those lovely rainforest trees where the road would be built – green gold going to waste? Oh dear, I wonder why I am SUCH a cynic???).

The first pix below is the old road. It was built with shovels and buckets and donkeys (or maybe mules?). Occasionally it has a small landslide – the main range is very friable and ancient, the rains are heavy and frequent. But the road survives and looks lovely. I have walked it many times. 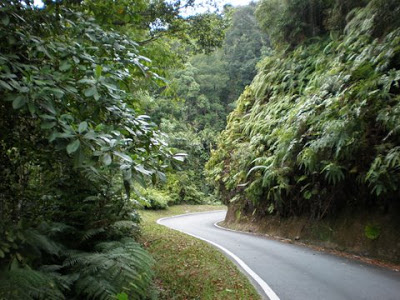 But they went and built a new road anyway, for no good reason. (Well, they might have thought green gold was a very good reason…) They used dynamite and huge earthmovers and trucks. Instead of gently winding a route around the hillslopes, they bulldozed and blasted a barren swathe through the forest and fragile slopes.

The road took four years longer than expected to build, because – er, well, actually the slopes kept on falling down into the valleys. I wonder why.

The new road was opened after much expense. You could drive up it and never come closer to the forest than several hundred metres, because all the forest along the road was, um…missing. (Look again at how pretty the old road is.)

And fairly promptly the new road was closed because of landslides. And stayed that way for a looooooooooong time. After much rebuilding, it was opened again. For a bit. Then it closed again last December. And it is still closed.

Pix below shows why. 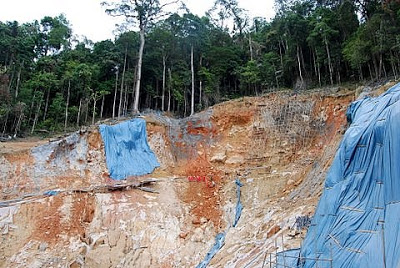 If you look carefully – just to get an idea of scale – right in the centre of the picture are some red dots in the middle of a slide of reddish earth. Those red dots are people wearing red work clothes.

And I just wonder – who benefited from the new road and all the timber that came out of there?