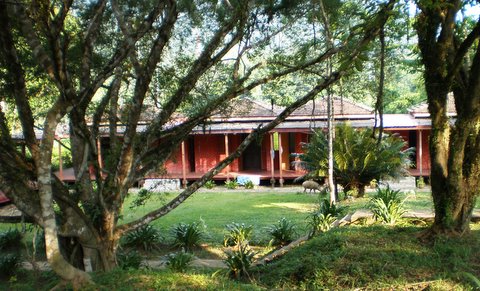 Rooms with a view: the fig tree and the accommodation (note the pig).

I’ve just come back from introducing our houseguest to Taman Negara. 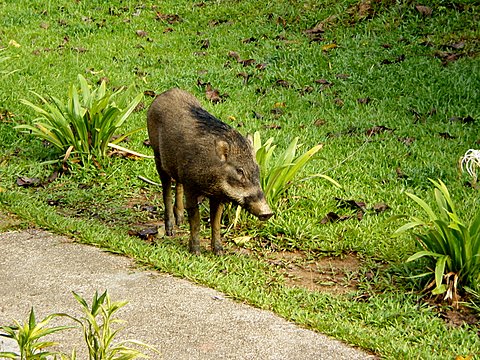 Once I planted a fig tree in the garden – that is, a tropical ficus species. I did so because they periodically have prolific fruit-bearing extravaganzas, attracting birds, bats and mammals. When we were away living in Europe, our house sitter asked the gardener to cut down the tree – because fig trees are (supposedly) full of scary things like spirits and djinns. Well, in one way she was right. There are lots of lives up there in the ficus when it’s fruiting. 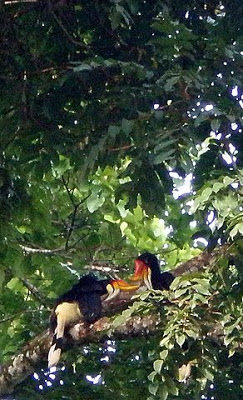 In Kuala Tahan, Taman Negara (Pahang), a fruiting fig tree was probably the highlight of the trip…

It was quite difficult to drag ourselves away from that fig tree. Everywhere you looked into the foliage, there were birds. Bulbuls predominated, at least at first – from the common garden variety (Yellow-vented), via the secondary forest specialists (Red-eyed, Stripe-throated and Olive-winged) through to the strikingly dapper hill forest species seduced down to the flats by the fig-fest (Ashy), and others – the spectacular (Grey-bellied), the large (the Streaked) and small (Spectacled) and common forest species (Buff-vented). Nine species on one tree… 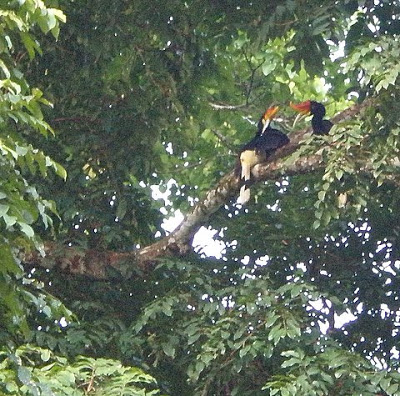 The much rarer Green Broadbills, with velvet plumage of a lush emerald green and beaks like voracious steam shovels, gorged themselves at regular intervals. A Coppersmith Barbet – with a red cap and matching bib as bright as flame – plinked out its monotonous hammer-on-metal call, at least when it wasn’t eating, to the occasional accompaniment of song from the Gold-whiskered, the Red-throated and the monotonous Blue-eared members of his family. The black and royal blue Asian Fairy Bluebird – as spectacularly clad as a university chancellor at a graduation ceremony – ruled the tree in the afternoon.

Well, he did, until the Thick-billed Pigeons arrived. Fluffy-bottomed, maroon-winged and wearing aqua spectacles, the first ones was hardly competition, but more and more birds came, to be soon lost in the foliage, until at last I decided the tree must have swallowed at least a hundred of them. A few Little Green Pigeons added a bit of variety to the mix. The canopy rustled and shook, branches swayed, while avian voices muttered and murmured and clucked and whined in plaintive chorus, a pigeon pie of conversation.

In the morning, the tree was swarming with hanging-parrots, plucking the fruit at the thinner end twigs by means of acrobatic contortions, often upside down. Then came the familiar team-train sound, a pair of Rhinoceros Hornbills in flight – in this instance being hotly pursued by a pair of Racquet-tailed Drongos. Even the macaques in the tree had to take notice of these giants (see final pix of the pair preening after feeding).

Add in a few Common Mynas and Glossy Starlings, plus a few non-fruit eaters who came after insects and we counted 24 bird species at the tree. All just outside our rooms. That’s not bad going.

Ah, yes, I thought. The tree spirits have awoken: the birds at a feast. And to think that there are institutes who have dedicated themselves to producing fig trees that neither flower nor fruit, because the fruit makes a mess.