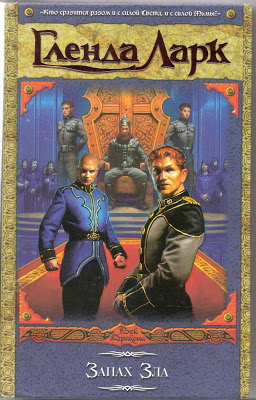 I love my Russian publisher. They pay up no problems, and each book I sell, they pay more than the time before. And looking forward to what they put on the cover is part of my enjoyment of being a writer.

Now I know I have put up the cover of the Russian translation of “Gilfeather” before, but that was when I pinched it off a Russian online booksellers website and it was a poor res pix.

Yesterday I received a copy of the book, and I just can’t resist putting it up again in all its glory.

First let me point out that the printing at the top is actually in glittery glossy red, and the two gentlemen are equally shiny glitz – they look as if they have been stuck on. Unfortunately the shine didn’t scan very well.

And that top text is my name. Yep, that’s right, I have my name in BIG SHINY print. The bottom little print is the name of the book which translates – I believe – as Smell Evil .

Let me tell you about Gilfeather. The hero is a simple country doctor who spends most of the book chasing assorted villains through the countryside and across seas for rather complex reasons, and generally having a harrowing time. He does briefly land up in the ruling house of a island (hardly more than a rock stack covered in nesting birds and sheep) where the ruler is a woman, and I guess there are a few uniformed guards scattered about. They certainly aren’t dressed like space opera dudes, or 19th century military regimes, and there’s no guy sitting on a throne, it’s a gal.

I guess I should be glad that I didn’t get a pole dancer, like Jenny Fallon did on one of her Russian titles…