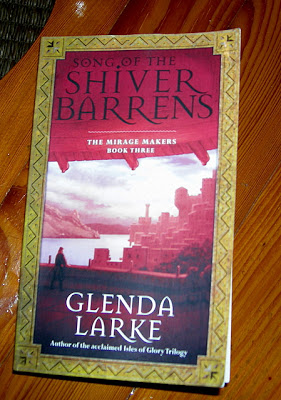 Yes, it’s that time of the year when the shortlist of five is announced.

And Song of the Shiver Barrens has made it. I was so thrilled that I shot off an email to my agent and the Orbit UK team, and managed to get the name of my own book wrong. Sigh.

It means that every time I have had a book in the running I have made the shortlist, which is really encouraging…

I am delighted to see fellow Voyager author Jenny’s book up there, because I thoroughly enjoyed it and thought it the best book she had written to date, and that’s saying something.

There are some other pals up there in the short story sections, and two fellow Orbit/Voyager authors in Sean Williams and Marianne de Pierres in the Science Fiction category. Congrats everyone.

My grateful thanks to the Aurealis team and Fantastic Queensland and Chimaera Publications for putting in all the hard work to keep the awards going.

The winners will be announced Jan 26th. Alas, won’t be able to attend…too far, and too expensive.
More here.