Sometimes an email comes along that makes everything worthwhile. And I have had one such from a man who just made my day.

“I have read Havenstar now for the 20th time. This book still manages to surprise me, even shock me and I still cheer for the characters even though I know what will happen. It is by far my favourite book of all time. I only wish it would have been a trilogy, with each book having more than 800 pages. “

How cool is that?

He then asks an interesting question, which I thought I would answer here. He was wondering what prompted me to make the heroine rather plain in looks.

And here’s my answer.

For a start, not being pretty myself, I have a natural dislike of the idea that someone has to look good in order to be heroine. I don’t think it was a coincidence that my favourite novel when I was about thirteen was Jane Eyre.

Beauty is something we are granted if we happen to be lucky; it’s not something we earn. I wanted to say that other things are much more important: courage, standing up for what you believe is right, loving wholeheartedly and being prepared to make sacrifices for those we love, never giving up even when things look bleak, working hard to achieve a better world, and so on. 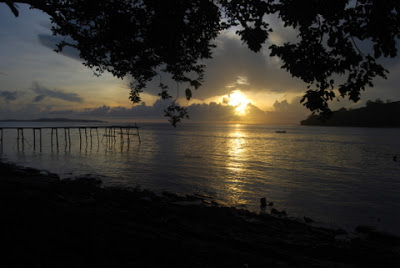 Those are the things that made the main character in Havenstar heroic, and in the end, the other characters forgot all about the fact that she was rather mousy and insignificant in appearance – and in fact, I rather think than when Davron Storre looked at Keris, he thought she was beautiful.

And speaking of beauty, here is a sunrise this time, as seen from our accommodation on the island of Banggi, Sabah.