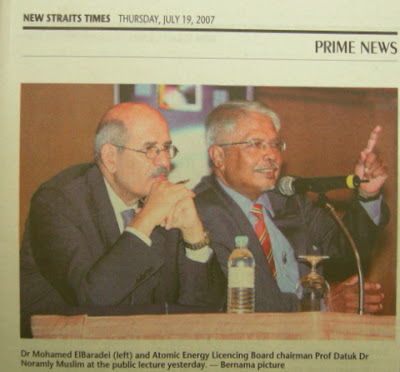 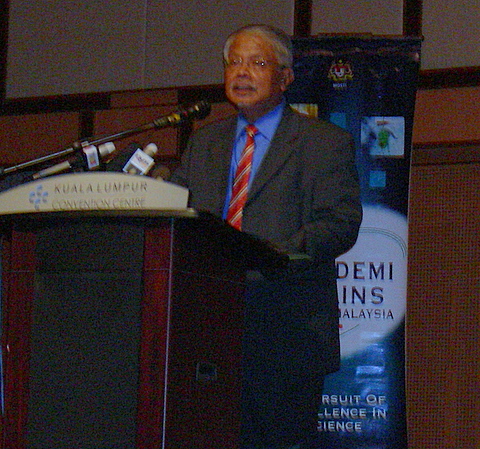 Right: Dr Mohamed ElBaradei and my husband, question time at the lecture… 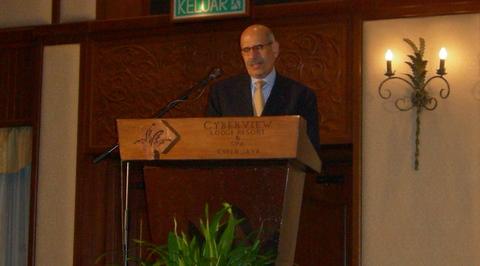 My husband was once the Deputy-Director General of the UN International Atomic
Energy Agency (AIEA), and so today he found 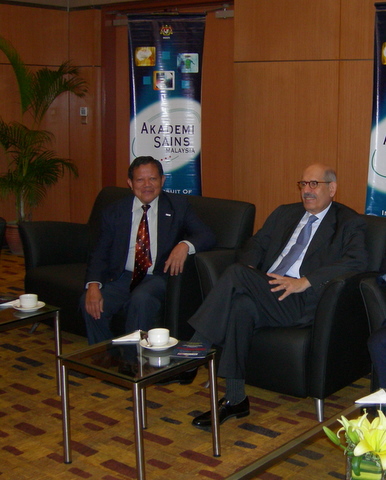 introducing one of his former staff at a lecture hosted by the National Academy
of Science here in Kuala Lumpur. That gentleman went on to be the present Director-General of the agency, winning the nobel peace prize (joint-winner with the IAEA), for for their work producing evidence for some very dumb politicians – only to have them disdain to believe what they were told and shown. You know the ones I mean: their popularity ratings have sunk rather low of late. Unfortunately too late for the security of the world and the thousands upon thousands of people who have died and who are still dying.

Dr MohamedElbaradei gave an excellent speech on the dignity of nations and the future for nuclear power. Yes, as an environmentalist, I do support nuclear power.

It’s a lousy photo of my husband giving the introduction…
The last two photos are of a couple of friends talking to Dr ElBaradei – Dato’ Salleh Nor, whom I know very well because he was president of the Malaysian Nature Society for many years, and who is now Secretary of the Academy, and in the last photo, Tan Sri Halim who was the Malaysian Ambassador when we were in Vienna, whose kids were at school with ours, and in whose lovely home (in the 18th Bezirk, if I remember correctly) we had many an enjoyable evening.

Ah, nostalgia. Would I could go back to Wien, for a visit. In winter, walking up Beethovengang behind our house just after a snowfall … magic. Or in the spring when everything comes alive with astonishing suddenness. Or in summer, riding a bicycle along the Donauinsel with the insects rising from the grass like mist in the sun. Or in autumn when the leaves change colour and the fogbound mornings turn cold, and shops stop selling icecream and put out the Krapfen instead …