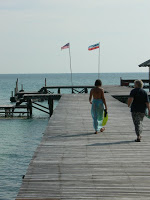 Nicole asked a second question too: Which book that has been published do you wish you did write, and why?

You mean, besides The Da Vinci Code or any of the Harry Potter books, right?

That’s a tough one.

Would I like the money of J.K.Rowlings?
Or the esteem given to Tolkien who broke the ground first in so many respects?
Or the literary nod given to fantasy writers whose work is considered mainstream literature such as the Latino magical realism writers?
Or the adulation given to Gaiman by his legions of fans?
Or the respect of my peers as is given to people like Gene Wolfe?

Aaaargh, the question gets harder and harder.

I’ve just hugely enjoyed Temeraire by Naomi Novak. Would love to have written that – it’s so well done and such fun at the same time.
I’d love to have the satisfaction of knowing I had written just about anything by Guy Gavriel Kay – the being able to write a brilliant story in such good prose…

I want to write books that keep people up at nights until they’ve finished reading, at the same time as writing beautiful lyrical language…is that too much to ask? Lol…