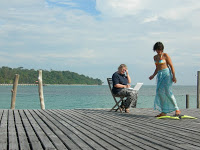 Nicole Murphy asks: I’d like to know what part of the process of creating/writing/editing /publishing/promoting a book you find the most satisfying?

That’s a different question to “What do you enjoy the most“.

If you had asked me that, I would probably have replied: the first draft. Scribbling things down as they come tumbling out of my mind. Getting that first rush of words down on paper and beginning to feel the shape of characters come alive as they hit that brand new world I’ve just created. Thinking, Hey, that’s neat! as I think of a plot twist or I express something particularly well.

Satisfaction? That’s a bit different. I loathe marketing anything, so no satisfaction in promoting a book [although I do like meeting readers, not necessarily the same thing].

[Hey everyone, you ARE aware that Song of the Shiver Barrens hits the bookshops in Australia this week, aren’t you? And you ARE all rushing down to the nearest book store to buy, right??]

Ok, promotion out of the way, let me get on with the really interesting stuff.

The first sense of satisfaction is when the first draft is completed. [Whew, I actually have created something that has a beginning, middle and an end. May not be very good as yet, but it does exist…]

The next satisfying feeling is when I feel I have got it “right”. And that varies from book to book. It usually occurs sometime during one of the drafts, when I feel that I have everything in the right place, in the right order. The plot is behaving, the characters are all nicely well-rounded, I have a book, rather than just a story. Then I know I can get on to the polish. Sometimes that moment is elusive and I seem to have to chase it all over the place as the deadline gets closer and closer. Sometimes I need beta readers to help me get there, sometimes not.

The next moment of satisfaction is when I send it off to my editor and she gets back to me and says, ‘That’s great. I am sending it to copy edit.” That has even occurred several times without going through an intermediate stage when she makes suggestions for a rewrite. There’s an enormous feeling of satisfaction at that moment.

By the time I hold the published book in my hand, as special as that moment is, I probably feel more relief than satisfaction. The process of copy edit and proof reading has left me feeling more exhausted than anything else.

The final moment of satisfaction is when the first person gets back to me, after having bought the book, to say something complimentary – i.e. that they thought it was money well spent. That is the supreme moment, especially if it is someone I don’t know or have little connection with and therefore – I assume – it must be an honest comment! …That, quite frankly, is the moment that makes all the effort worthwhile.

And it still knocks me endwise: the idea that I can write something that brings pleasure or satisfaction to a stranger.

So, please, someone out there, tell me (honestly, now) what you thought of the Song of the Shiver Barrens….