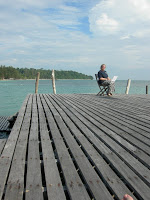 What’s the most powerful thing about the fantasy genre?

I haven’t a clue what it is for most people. But as a reader, the most powerful thing about the genre for me is its ability to offer me so much in one package, so much between the covers of the one book.

Fascinating characters, good writing, great plot, action, intriguing background, thought-provoking issues – all those things you can find in many novels about today’s world, but fantasy offers more. It can be a war story, a crime novel, a romance, an epic, a history, all at one and the same time. It’s the sheer challenge of reading a fantasy that blows me away if it is done well.

There aren’t too many mainstream novels that can do all those things in one book. But then again, fantasy & sci fi readers are the most intelligent of readers. They can take it!

As a writer, the most powerful thing is the possibility of saying so much without being boring. I am a great believer in writing good entertainment, but I do like to say important stuff at the same time. In a mainstream novel this can come across as preachy or just plain dull because the setting is so close to home. In a fantasy, it’s easier to make the story make the point, if you have one.