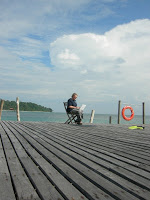 Argus Lou asks:
Which character in each of your books do you see as an extension or a fantasy version of yourself?

Hmm. Certainly there are none that resemble me physically.

When one of my book group remarked that she thought Blaze was a lot like me, I replied, “Well, maybe a lot like I would like to be. You know, tall…with a great head of hair…”, whereupon they all laughed. Which should tell you something!

But to be more serious, none of my characters are me, plus height and a great hairdo. A few, however, possess some of the traits I like to think I have. Keris Kaylen in Havenstar and Samia in Song of the Shiver Barrens both have a practical no-nonsense attitude and a rather forthright way of expressing themselves which I like.

Blaze in The Isles of Glory and Ligea in The Mirage Makers are both too bloodthirsty for me – if I were to meet them, I’d run a mile. And if I were to find myself in one of the hairy predicaments that they take in their stride, I would be scrambling under the nearest bed, not reaching for a kitchen knife or sword.

I think I would have to say that I have more in common with Gilfeather‘s pacifist tendencies, and his (often thwarted) desire to work things out in non-violent ways. I’m a writer after all, and that’s what we tend to do – try to change the world with our brand of magic, without a stick, sans bazooka.

Y0u know what? You’d probably do better to ask my friends this question, and see what they say!

One of these days I shall write a fantasy heroine that is me: a sixty-plus environmentalist, a bit overweight, thinning hair, myopic and arthritic, acerbic and logical, often forgetful, with a great sense for the ironic…I wonder if it would sell?