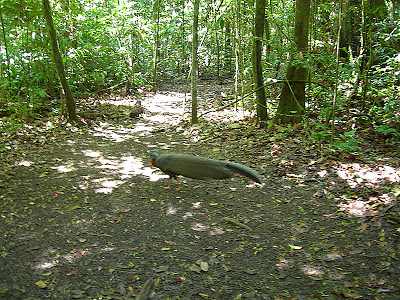 The photos are a bit out of order I’m afraid, so I have explained what they are as we go along… 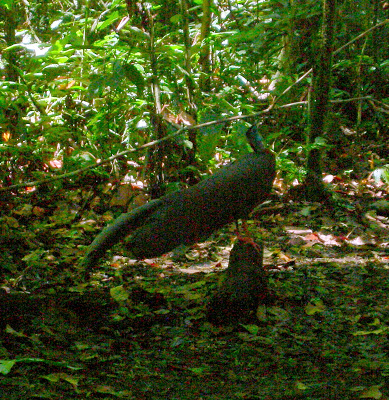 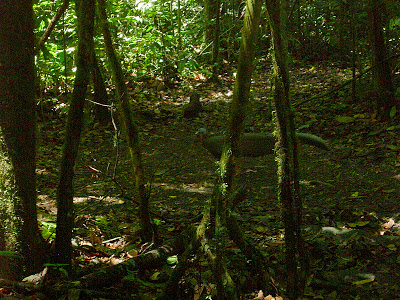 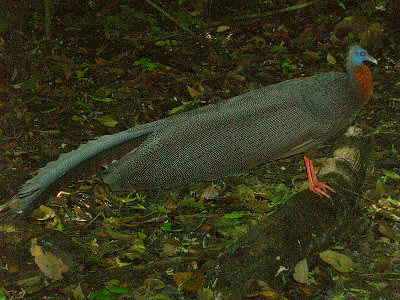 Remember what I said about the camera acting up at crucial life moments? Ok, so most of you will not regard an Argus Pheasant practising his courtship dance steps A Big Thing in your progress through life, but then, most of you are not birders.

These are lousy photographs of a wonderful experience. Most of the time I was watching, not snapping photos. And believe me, it was a superb moment in my life, and not one I ever expect to have again.

The Great Argus is a forest bird, not easily seen unless it has been habituated to the presence of humans. This particular bird (photo 5 for my best shot) chooses to clear his dancing ground (photo 2) on a path through the Danum Conservation Area not far from the Danum Rainforest Lodge, which means that he has to put 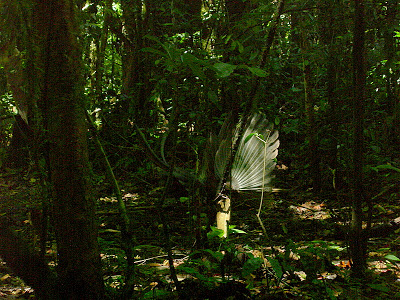 up with people passing by from time to time. 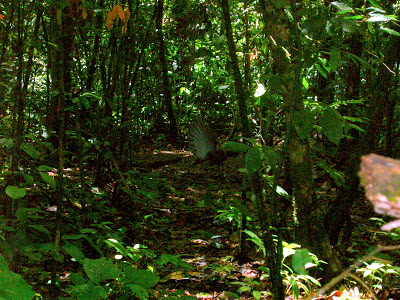 In between times, he industriously cleans his stage, and flicks away the leaves that fall on it. (photo 4) He’s a rather inefficient housekeeper, flicking leaves upwards until they more or less accidentally fall outside his performance area (bit like like a guy who has never handled a broom tackling a dusty floor…)

Then he hops up on to a log and calls, throwing his head back and giving vent to a repeated loud ringing wow-wow that would be enough to have you jump out of your leech socks if you weren’t expecting it. (Photo 3)
And that, really, is about the very most a b 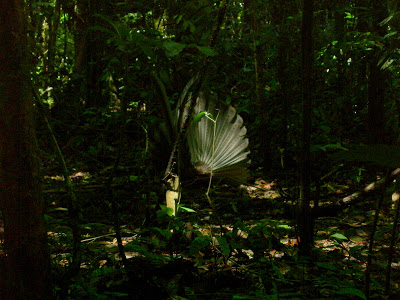 irder could ever expect to see.

So it was an enormous privilege to be able to watch – repeatedly – a male practice his dance for an absent female, possibly prompted into this display by a rival male approaching, calling as it came.

He started with a sort of ballet-dancer run, shivering his feathers out fluffily as he went. (For some absurd reason I was reminded of the dance of the cygnets from Swan Lake when the dancers skitter along on their toes n tiny steps…) 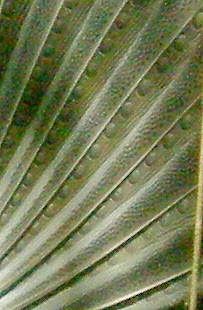 And then he began his dance.

(Photo 1. In this photo he is facing me, with his head visible as a whitish spot. His wing feathers – right side outwards with ocelli displayed – surround him, while his tail feathers are visible to the left. Photo 7 is next in sequence, where he has turned side-on, to the left, lowering his head.)

He bowed his head and raised his magnificent wing feathers to display the ocelli, whipping his long tail feather backwards and then straight upwards like a banner over his back….then he flexed his feathers so that I think we are looking at the underside of the feathers (photos 6, 8 & 10 ) He was suddenly no longer bird, but a galleon under full sail, a magnificent vessel with all flags flying, turning this way and that, offering his splendour to an enraptured audience of four, for whom he cared not a whit – alas, the true object of his dance, a female, was nowhere in evidence.

For an hour we watched as he danced, not once, but four or five times. I’d love to think he did it for me, even as I know that’s not true – because perfect moments are things you will carry with you the rest of your life, and for me, this was one of them.

And there are people who would destroy the rainforest?
They know not what they do.

Two final photos : enlargement s of the previous one, showing the tail feathers raised on the left and the wing feathers to the right, also seen in enlargement. The birds’s head is hidden. Alas, the true technicolour of the display was lost in my camera’s attempt to cope with dark understorey conditions. 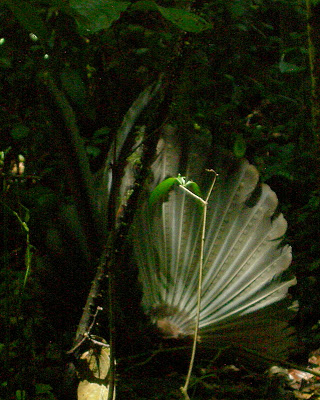