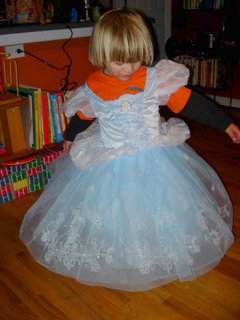 My grandson is two plus, that age when a mother starts to think of potty training.

Like all good mothers, my daughter thought of bribery. She told her son that when he obliged, she would take him to the toystore, and he could have whatever toy he wanted.

Like all grandmothers with a good memory, I started to laugh.

The day arrived, grandson obliged, and off they went to buy a toy. He selected a train, but then wandered off before the purchase was made to have a look around.

And went into the costume section. And, of course, having impeccable taste, he selected the most beautiful thing he could see – and changed his mind about the train. 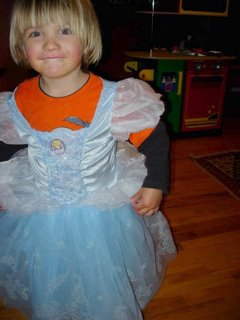 After all, what more lovely creation can you imagine than a puff-sleeved dress fit for a princess, covered in glitter, net, and ruffles?

Now his mother is very careful about gender typing. But, well…maybe there is a limit.

“I want that,” says he, pointing at the dress.

She reminded him about the train.

“I want that,” says he, pointing at the dress.

They circled the store, looking for something else to catch his eye.

He went back to the dress.

So she caved in. A promise is a promise. So my grandson is now the proud possessor of a pale blue princess dress. Which he wanted to wear there and then.

At home, the dress went on immediately, over jeans and t-shirt, and stayed that way the rest of the day. Even though he did wonder why his mother wouldn’t let him play outside until it was dark that evening.

Father, when he gets the news that his son has cross-dressing tendencies, wails, “Couldn’t you have shown him Spiderman?”

Grandmother – me – is now hoarding these photos and planning for the day when grandson is a linebacker for the university football team and dating the college sweetheart. How much do you think he will pay?