↓
Home Menu ↓
Skip to primary content
Skip to secondary content
Home→Blog→Blog→Kill them books! Quick, before they enlighten you… 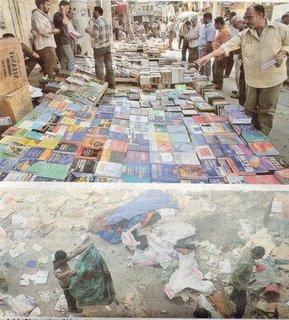 Criminals in Baghdad have just blown up the book market. They killed a lot of books as well as people.

Some people fear knowledge. They know it sets people free. They know it enables us to make up our own minds, instead of swallowing their hate and bigotry unquestioned.

A few brainless librarians in the USA ban kids’ books that contain the word “scrotum”;
Nazis burned books;
Communists banned just about anything that looked interesting (in the hope that brains would die of terminal boredom?);
Right-wing Christian nuts stop their kids from reading about wizards;
The Malaysian government censors ban anything that looks iffy to their literary-challenged minds.

In Bagdad they blow up books. The only difference is the matter of degree. Loss of stimulation that prompts the ability to think for oneself on the one hand, loss of life as well as the books on the other. It is all tragic. It is all a step backwards.

Some people cannot see that a closed mind has no value, and certainly no virtue. How can there be virtue if you have never seen an alternative? Never been allowed to think for yourself?