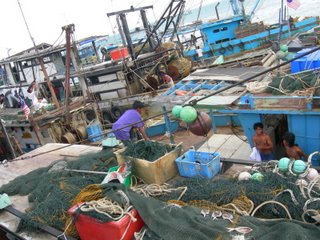 There’s an island off the southern coast of Sabah called Sebatik. As the sea swallow flies, it’s not that far from the famous diving island of Sipadan, but it’s closer to the coast and the town of Tawau. My sister and I have just come out of the forest and want to head to Wallace Bay, a village on the west coast of the island facing the mainland. Getting there, though, was a fascinating experience in how NOT to travel… 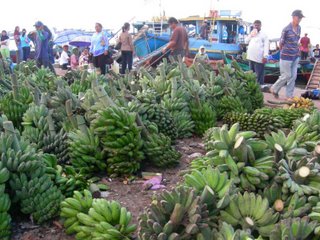 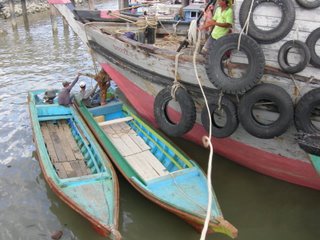 Start the journey not knowing which wharf the boat is leaving from, and your fun begins. Try the ferry wharf, the fish market wharf, the customs’ wharf, the marine police wharf, the fisherman’s wharf, and anything else that looks as if it has boats, until you finally end up on the, um, well, banana boat wharf?

It is nearly nine o’clock, one hour after due departure time, but we have found more of our group and they assure us we are at the right place. Really. 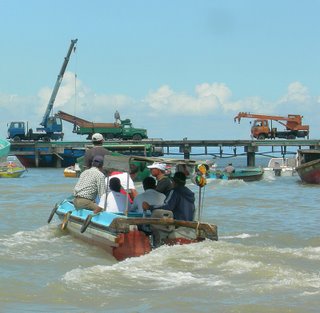 The folk who drove us there disappear to look for their boat; they have a vessel with fast engines and expect to arrive several hours before we – who are about to board a borrowed vessel – can. What they don’t know, is that they have already been Noramlyed. They started the trip with us, after all. 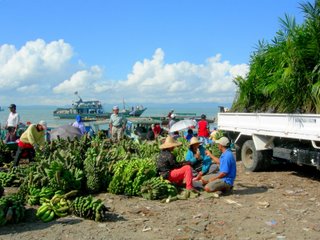 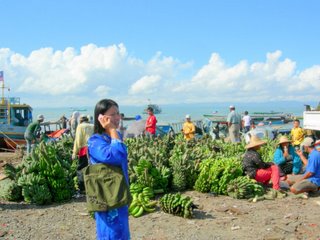 The port is bedlam, and our boat is not there. There is actually no wharf – just gangplanks linking seawall and boat decks. So we wait.

We pinch a few cocoa beans from a gunny sack and eat the chocolate seeds. Delicious, crunchy. Bananas and salt sacks, a heap of kitchen gas tanks, young oil palm plants and a wheelbarrow loaded with long beans – even a washing machine – pass us by, to be shouldered or humped on to one or another of the long wooden “tongkangs.” A bridal party flutter past in shiny silken colours, fingers thumbing handphone keys in silent chatter. 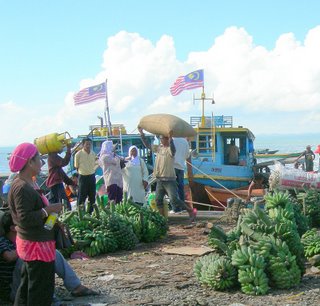 In spite of the occasional modern touch, the scene – smells, produce, noise, heat, colour, sweat – is straight out of Conrad’s “Lord Jim.” I am half expecting a red-faced, sweating white man in a topee to come striding up to berate the Lascars… No, maybe that’s a bad image, considering what happened to Lord Jim’s ship. And anyway, the sweating, red-faced sahib is me, although I can’t find anyone to berate.

Finally our tongkang arrives, but cannot find a berth along the crowded waterfront. We wait some more and finally our boat nudges its way in and we load up. It’s a strange vessel; like most tongkangs, it is wooden and looks homemade. This one has such high sides it is hard to see out – bit like the traditional depiction of Noah’s ark, except the super structure (which is, in fact, only the loo) is at the stern, not amidships. 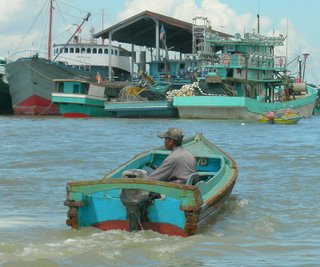 We are all on board within minutes, but still we don’t sail. All the fuel has to be put on board. Carried on. In jerrycans. The boatman siphons the first lot into the fuel tank, starting the process by personally sucking the fuel along a plastic hose. He then smokes a cigarette.

Then when that is done, another plastic hose is connected from the shore to bring water on board into two large plastic barrels. Finally we are off. One of our female passengers has a stomach ache and disappears into the loo. 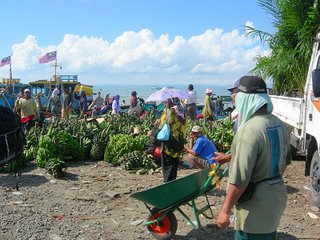 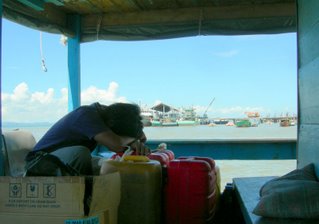 Oops, we aren’t quite on our way even now. We have yet to negotiate a number of boats of varying size and speeds, scurrying along like water beetles through the port. Then we stop. And anchor. We wait and wait. “What are we waiting for?” one of the expedition members asks one of the two crew on board.

Seems one of the crew is not coming with us. He needs his bag – which is in the loo. We wait some more. And some more. Finally the loo is vacated, the man retrieves his bag, and disappears towards the shore in a small boat.

Still we don’t leave. What now? someone asks. Seems the boatman sent crewman to buy him some cigarettes. The boatman puts his head down on the jerry cans and snoozes. I wonder if you can get high on petrol fumes. 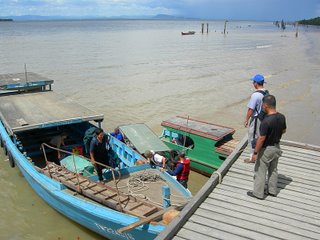 Eventually he has his cigarettes. The anchor is raised – slowly – by hand. Very slowly. and finally we are off. Only thing is that this tongkang is a heavy vessel. And it has one engine. One outboard engine. A 75 hp engine at that. It takes us fifteen minutes just to clear the port. We could already see Sebatik Island, even before we left the dock. For the next two hours, it grows no closer.

Three hours later we arrive in Wallace Bay. (That’s us in the last pix abandoning the boat at the Wallace Bay jetty).

And if you want to know what happened to the other Noramlyed boat, I’ll tell you tomorrow. Believe me, they got the worst of the Noramly curse.

*a term invented by my daughters’ long suffering men, to cover what happens when you travel with a member of our family…