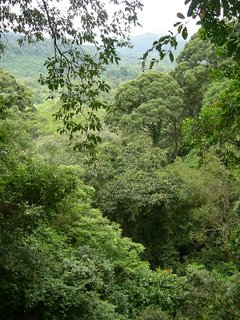 Just got back from a weekend at the Kinabalu National Park, so be prepared to be bored with photos over the next few days. These shots are from the top of a Tualang tree (Koompasia excelsa, the highest emergent and also one of the most beautiful of our rainforest trees) looking down on to the forest canopy, and so to the forest floor 41 metres below. I went extravagantly mad taking photos looking straight down…don’t you love digital cameras? 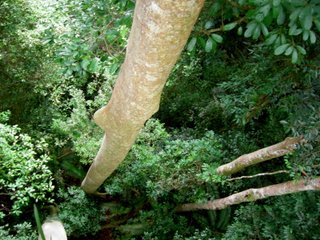 Last week I said I was going to talk about why I gave up on adapting to my adopted country – why I went so far, and not that little bit further.

I guess the main reason is that I found I couldn’t – my skin colour and appearance is always going to keep me apart. I can never be anonymous. And just as a Malaysian friend living in Vienna used to grind her teeth over always being taken for a Filipina maid, so am I frustrated by always being taken for a tourist and treated differently on the basis of that. Hey, ten to one I have lived longer in Malaysia than the person speaking to me. After all, I first came here 37 years ago. And I probably know more about the rainforest, and can recognise more plants and animals than 99% of Malaysian citizens who have lived here all their lives. Point at a Tualang tree and ask the average citizen about it and they can’t tell you a thing, not even the name.

Yet people make immediate assumptions about me:
I am richer than they are (which sometimes translates into ‘therefore I can charge her more’)
I can’t speak the local language 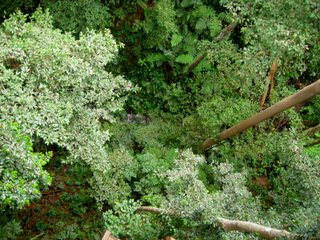 I know nothing of the customs

And adapting outwardly makes no difference. If I wear a baju kurung, people stare. If I speak the local language, they reply in English or jump out of their skin. If I eat chillies they are impressed. If I make a local curry, they are astounded.

A second reason to draw the line is that officialdom has no interest in me whatsoever. They have refused me permanent residency (without giving a reason), so every year I have to go along with my husband to an immigration office, pay money, and beg to be allowed to stay yet another year. They offer awards and medals and titles to my husband for the effort he has made on behalf of his country, but treat his wife like she doesn’t exist. Over the years, I have done a tremendous amount of volunteer work, free of charge, yet they still obviously don’t want me here. (They won’t allow me to work for money without going through an incredible rigmarole – even when a government department wants to employ me!!)

So why should I go the extra mile?

Somehow when someone talks of discrimination and prejudice and poor treatment of immigrants etc etc, everyone jumps to the conclusion that they are talking about a Western country doling out insults to people with dark skins and/or non-Judae-Christian religions.

Oh? Tell me about it.

Don’t get me wrong – I love this country and its people (after all I married a Malaysian and I have two Malaysian daughters and I’m still here, even all these years later). But if they want me to fit in like a Malaysian, they’ve got to do better than that.