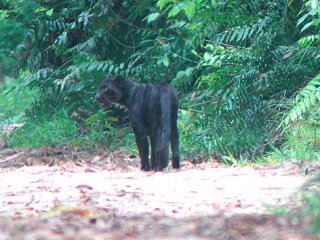 This is a picture of a Black Panther. It was taken by a friend of mine, Lim Kim Chye, when we were on a project together over in the Pahang Peat Swamps.

It is also a picture of a leopard.

That right, this is exactly the same animal, the yellow one all covered in spots, that you see drooping over the branches in an African thorn tree. In fact, it is perfectly possible for a leopard to have a twin cubs, one black and one yellow. And if you look very carefully at a Black Panther (as I did at this fellow when we tumbled out of the 4WD to take a look) y0u can actually see the black spots superimposed on a grey-black background.

When I was a kid, a long, long time back, I went through a stage of reading a lot of American/Canadian “boys’ own” style stories – you know the sort of thing, frontier stories, Indians and Mountain Men and the French wars and so on, Last of the Mohican type tales. And in almost every book there seemed to figure a shifty figure, dishonest to the bone, called the “half-breed” who absolutely couldn’t be trusted, apparently for no other reason than that he was a half-breed. No other reason seemed to be needed.

Which struck me as a little odd, but I didn’t lose any sleep over it; that type of book was considered suitable fare for a school library back then.

But somehow, the niggle must have stayed. Because one day I wrote a book about a halfbreed*. Who wasn’t shifty, and who showed herself to possess far more integrity and courage than some of the other characters who had impeccable lineages and genteel backgrounds. I guess I had something to say.

What point am I making?

When people ask me “why do you write fantasy?” in a tone that suggests I am throwing away my talent because I should obviously be writing “literary” works of great merit, this is one answer I give: So that I can make a point about things that matter, like tolerance – or point out things that don’t matter. Like skin colour. 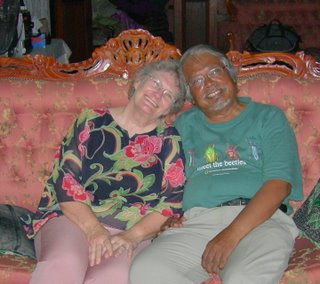 I could do that with a mainstream novel of course, but one is constrained by reality. Moreover, when you live in someone else’s country, in another culture, it is all too easy to upset someone. [What the hell is that foreigner doing coming here and telling us what we can and cannot do?] Genre fiction is a superb vehicle for making a point, making people think, without being crudely obvious.

Any idea how many times I was asked how or where I had adopted my kids?