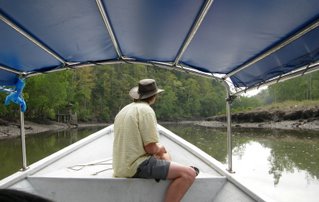 Exploring the byways of Langkawi by boat

Years ago, when I first arrived in Vienna to live, I was unsettled to see quite a few swastikas spray-painted on to public structures, along with some anti-Jewish sentiments that were as vicious as they were puerile. Geez, I thought, am I coming to live in a land where everyone hankers back to the glories of the Anschluss?

Then I realised that was an unfair thought. Every single one of those graffiti might well have been painted by a single idiot. Modern technology – in the form of a good transport system and a few cans of spray paint, and a modern economic system that gives us disposable excess income, had made indeed made it perfectly possible for one person to do irreparable damage to the good name of a whole city.

I was struck by several things just lately that illustrate that thought all over again.

An irate Australian from the Islamic Council of Western Australia remarked (about a series of video lectures made by a racist-religious bigot calling children to martyrdom and jihad): “Some lousy guy stands up and calls himself a leader of the Muslims, calls himself a cleric because he can read the Quran. Why do people like me have to sit here and give an interview because every Tom, Dick and Harry gets up and makes some studid comments – and then we are called to account?” (From yesterday’s “The New Straits Times”)

And I wonder if anyone called the Pope to account, every time a Catholic bombed someone in Ireland…hmmm.

Then, over on Dec 29th’s Baghdad’s Burning, (a blog by a young Iraqui woman who has had her life ruined by the invasion), outlining a situation I predicted way, way back at the beginning of the Iraq war:

Al Qaeda? That’s laughable. Bush has effectively created more terrorists in Iraq these last 4 years than Osama could have created in 10 different terrorist camps in the distant hills of Afghanistan. Our children now play games of ‘sniper’ and ‘jihadi’, pretending that one hit an American soldier between the eyes and this one overturned a Humvee.

And I think: all it takes nowadays is a few young men with a bomb instead of a spray can. So very few can make life hell on earth for all of us. Or if you want to go a bit further back: all it takes is a few irresponsible or moronic politicians to make a mess of things, and we all suffer.

And when will humanity learn the difference between being strong and being violent?

Sure, building a good fence can keep the peace. But build a wall and lob bombs over the top, and you end up with a lot of angry people and a lot more than a spray can in mind…

I saw this so clearly back at the beginning of the war. I am still flummoxed as to why it has taken so many people so long to see what I saw so long ago.