I had an email from a reader of this blog who asked about themes. (Thank you Ink Paws!) Do I consciously write a book around a theme? Or is the use of themes by writers – as some of her teachers posit – more unconscious?

For me, the answer is sort of yes and no. One thing I don’t ever want to do is write a book that sets out to lecture – so I try not to belabour a point. However, I do consciously write to a theme, taking care that it enhances rather than dominates the story, even as the story that enhances the theme.

Here are some of my themes, and yes, there is often more than one:

The danger of having just one super-power in the world;
how power can corrupt even people who have the best intentions;
how difficult it is to have a truly sustainable society without making incredible sacrifices;
how difficult it is to live with guilt and how much courage it takes;
how easy it is to be patronising about people who are different;
how love doesn’t always conquer all, even though it is important to have it.

All themes from the Isles of Glory trilogy. [The marketing folk in the US who designed the cover seemed to think it was all about swords and sorcery and sex!]

Heart of the Mirage has a theme revolving around the tragedy of stolen children (read the acknowledgements at the back of the book) and what we really are – the person we were born and intended to be, or the person we were made into by our upbringing – or neither. It’s also about how strong women (and strong men, too) can still do foolish things because of love. It’s about how terrible betrayal can be.

The Shadow of Tyr is about deception. It also returns once more to questions of guilt and betrayal. It’s about the hollowness of revenge. It’s about what happens to a child when a mother simply does not have time for him. It’s about whether war can be justified.

Havenstar had themes about religion, about living with uncertainty, about prejudice.

All those themes (and quite a few more!) were deliberate choices, made sometimes before I started the book, or developed from my personal beliefs as I wrote.

So I found it interesting when it was pointed out to me by a fellow writer (and watch out for his new book; it’s brilliant), Russell Kirkpatrick, that there was one all important theme that runs through all my published books that I hadn’t even noticed, and yet is central to them all. When I thought about it, it was so obvious I felt a fool for not recognising that it was there. Duh. I mean, how stupid can you get?

And what was the theme? — Being the outsider in a society.

My main character(s) is always the odd man out, plonked down in a world to which they do not belong, and where they have to learn to cope and survive, and even be happy.

Havenstar: Keris is wrenched from her comfortable, safe niche as a mapmaker’s daughter by circumstances beyond her control and plunged into a world where nothing is comfortable, let alone safe, or even the same from hour to hour.

The Aware: Blaze is the epitome of the outsider – she is even physically marked as an outsider and a non-citizen who is not allowed to fit in by law. (Geez, that sounds familiar when I think about it.)
In Gilfeather, Kelwyn is forced out of his pacifist, sustainable community into a much more violent world, where he is destined to become part of the violence he abhors.
In The Tainted, Ruarth is suddenly human after spending all his life as a bird.
In Heart of the Mirage, Ligea is returned to her real home, only to realise she is a stranger among her own people.

And of course, one doesn’t have to look far to see where all that is coming from…!

Looking back over my life, I see that the first time I became an outsider I was just eleven years old. Our family moved when my father retired. We went from a farm and a rural community to live in the suburbs of a big city. (OK, by today’s standards it wasn’t all that big, but it was back then…) I found myself thrust into a new school and a much more sophisticated society than I was used to, and I still remember how difficult it was.

When I was twenty-five I swapped my country and culture for another; I did the same thing all over again when I was forty-one, and yet again to a totally different society when I was forty-seven. And in the process, I have switched languages four times too. And you know what? It wasn’t always easy.

Yep, no wonder I have issues with being the outsider… 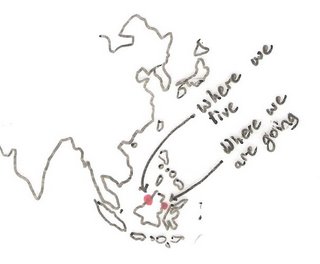 I am off into the wilds for a week tomorrow, camping along the lower reaches of the Sg. Kalumba, a tributary of the Segama River in eastern Sabah, where the proboscis monkey is king, Storm’s Stork nests…and the crocodiles are big. So no posts till Monday 20th.
Until then, let me ask you writers and readers out there:

What are your themes?
Have any of you had themes creep up and clobber you from behind, as I did?

I expect to find lots of replies when I came back. Play nicely, children!