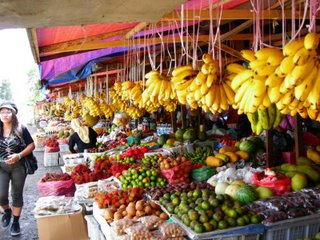 I am back – safe and sound. I think. And the 9 days away, cut off from so-called civilization now seem surreal.

We travelled from Kota Kinabalu to Sandakan by bus, crossing Borneo from one coast (South China Sea) to the other (Sulu Sea). We stopped to buy fruit along the way… 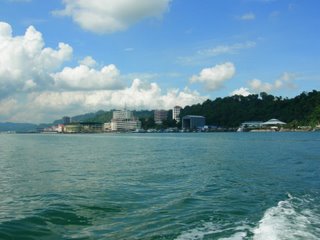 In Sandakan, we boarded a local fishing boat and said goodbye to towns and taps and phone connections and flush toilets and restaurants and newspapers.
Heading south, we wended our way through a web of connecting waterways, never venturing into the open sea, until we arrived at the Kulamba River, a journey of almost seven hours…on a boat that had no seats. 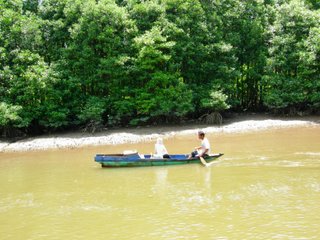 It was a wondrous, if uncomfortable journey. I worked for part of the trip, writing a project paper for my present job, but the rest of the time it was just a matter of taking in those wonders along rivers that are the roads, with traffic varying from paddled wooden boats belonging to fishermen, to luxurious speedboats bearing tourists who would spend more in a day than that fisherman would earn in a month.

We saw lots of proboscis monkeys, with a coloration that makes them look as if they are wearing pants and long noses that gave them the 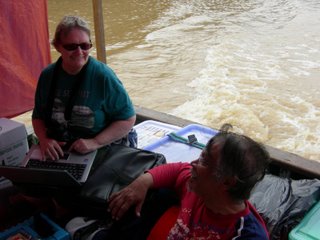 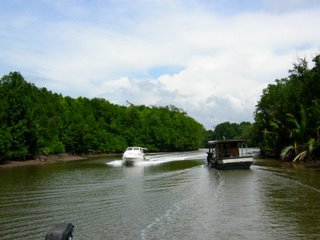 Birds – storks, egrets, herons, green imperial pigeons, sea-eagles. Orangutan nests. Fishing villages on stilts. A stop to explain our presence at the police post that is fully manned, complete with machine guns and two redoubts built of sand-filled tractor tyres and wood. The Sulu Sea has a long history of sea pirates…and the southern Philippines is a few hours’ sail away. 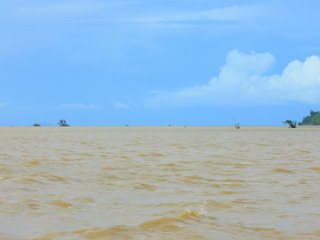 We pass by the two mouths of the Kinabatangan River, where the tidal flow bears out to sea not just Malaysian soil, but nipah palms bobbing along like weird monsters of the deep. More usually, they line the river in a solid impenetrable wall of fronds between the expanses of mangroves… 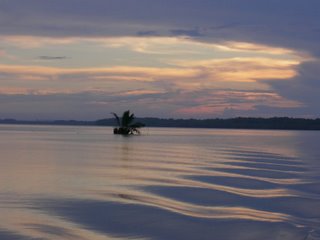 And so on into the sunset and past the nearest village on stilts over the water, to the Kulamba river, where we will stay under canvas. Just close enough away from the water to make sure the crocodiles are not tempted!

Many thanks to the UMS Institute of Tropical Biology and Conservation for inviting me along!