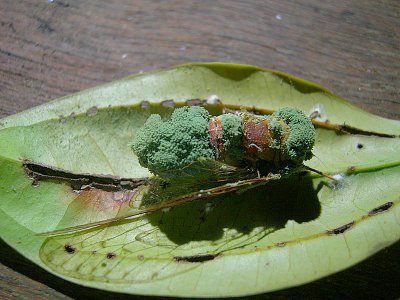 Yep, I have a thing about fungi now.

Here’s a cicada corpse. My perverse husband rejoices in these things. This insect was infected with a fungus growth that sent it mad. Something in that fungus made the poor cicada go to the underside of a leaf and cling there, nicely placed for the dispsersal of fungi spores. And there it slowly died as the fungus took over its body.

Jeff VanderMeer must have found his inspsiration in Cordyceps.