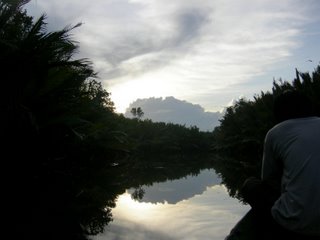 I have been to the rehabilitation centre in Sipilok, where they take young or captive orangutans and try to return them to the wild. They do good work. They’ve also been doing it for decades – indicating the failure of the country as a whole to control the poaching and the killing of this gentle red giant in all that time– repair the damage afterwards is the motto? Malaysia boleh. 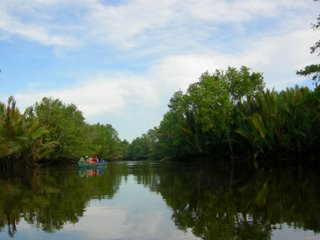 I have seen the semi-wild orangutan male at Gomontang Caves. But this experience in Kulamba was different. This was an encounter with a truly wild animal, one that has not had direct contact with man. A monstrous hulk of hair, twice my size, more like a Sumo wrestler with forklift arms dragging down to the ground. (Sound like your Dutch stepfather, Dave?) 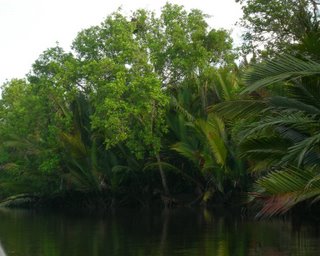 All along the rivers we had been seeing the nests of this species. Like squirrels, they build a new nest each night to sleep in, high in a tree, by bending banches and leaves inwards to a central point and sitting on them, deep inside a wall of leaves. These nests remain as a monument to their temporary occupancy.

And then one morning we were lucky enough to see an animal – a large male peeking ut at us from the nipah palms at the edge of the river. He seemed unafraid, and climbed a tree in full view of us in the boat. Unfortunately I was so excited I managed to drop the camera in the bilge water, and missed the best photographic opportunty. Nonetheless it was a magical moment – one of those times when you feel that all is right with the world after all. I felt privileged to have met the gaze of this sad-eyed creature, to have felt a connection through a look. Although perhaps I should also add that the noise they make sounds like a fart of elephantine proportions… 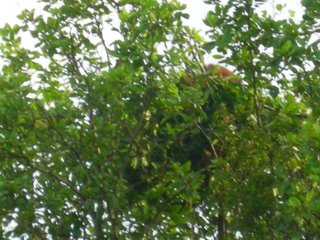 We returned to the nest the next morning to take another look, but the heap of reddish hair was reluctant to wake up. We left him to it.