I am writing this on the plane to Kuala Lumpur. I feel as if I have just emerged from a refugee camp…the low cost airline terminal In Kota Kinabalu is being rebuilt from the ground up, and it is pure bedlam. Dusty, noisy, and the usable part has been reduced in size to something akin to an emergency shelter, with walls of striped canvas.

The KL flight was full and the check-in counters too few and the queues had to wend their way around the baggage x-ray machines and the waiting area and the queue for the departure “lounge”. Part of the floor was taken up with a heap of Indonesian workers who looked as if they had slept there all night and were camped for the rest of the week. And in the middle of the queuing area there was a pile of unattended “baggage” blocking the way, most of it in gunny sacks. (Remember all those signs about unattended luggage? Well, this would be enough to make any USA airport staff member have a heart attack. No one showed the slightest interest in any of it for the hour that I queued. At least it didn’t blow up either.) One of the sacks appeared to be a sack of rice. Ok, tell me who would take a gunny sack of rice on board a plane that has a 15 kilo baggage allowance and charges you $US 4.00 for every kilo overweight?

And , of course, there were the usual uncooperative passengers who seem to remain convinced that they will not get on the very same plane that every else is queuing for unless they push their way to the front of the queue and argue with the check-in counter staff. Gotta love this place.

Just to add salt in the wound, husband is already on the mainland. He flew business class from the main terminal on the normal MAS flight to Kuantan, where he was met by a limo and taken to a fancy hotel for a meeting. He then rang me to say that he is staying in a suite – all alone – that is bigger than our whole Kota Kinabalu apartment. 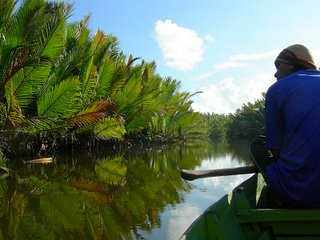 No justice in this world…

I will be back on the mainland for over a month, working on the avitourism project and being visited by my daughter and her son. Expect lots of grandmotherly gushing and photos from me soon.

Another shot from the Kulamba. This is Nipah palm…