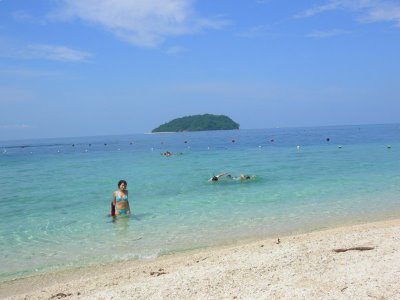 We spent five days snorkelling last week on islands off the Sabah coast. The worst thing that happened was that we stung by the tiny jellyfish called stingers. More a nuisance than anything else. We did see one small shark and some stingrays.

When we were on Snake Island, someone made a remark about the place being the ideal sort of place for Steve Irwin – the TV “Crocodile Hunter”, with all those snakes about for him to tackle. Not, I must admit, my ideal show as I always thought there was far too much harrassment of wild animals. I guess I just don’t like seeing wild animals filmed in a way which indicates they are stressed. And now Irwin is dead, in Queensland, stung by a stingray that felt threatened by his too-close presence and lashed out with its tail to pierce his chest. Such a silly, tragic way to die.

It reminds me of an even more bizarre death that occurred back in the 1960s in the Straits of Melaka. The Malaysian coastguard or navy was towing an open boat with several Indonesian soldiers on board who had been caught trying to enter Malaysia. (Remember the so-called “Confrontation”? Such a ridiculous, small-scale business no one wanted to call it a war or an invasion, even though some soldiers were sent to “invade” Malaysia.)
Anyway, one of the soldiers keeled over, mysteriously dead. All that could be found was a small wound, on his neck, if I remember correctly.

It took an autopsy to discover what had happened. It seemed that a small flying fish with a pointed snout had hit the man as his boat was being towed – the snout had broken off and the rest of the fish disappeared overboard, leaving a dead man. Killed by a small flying fish.