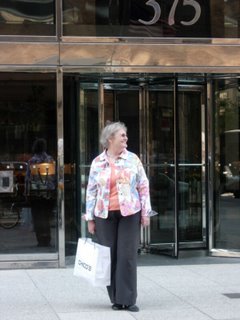 Here’s me in New York, outside the Saatchi & Saatchi Building, which is where my publisher has their offices. Note the grin.

How old was I when I first had this dream of having a New York editor? No idea. But I do know that I was a writer at eight years old. We lived at the time in a very small farming community in Western Australia, where the boys were likely to turn up to school barefoot in summer, and New York seemed as remote as the moon. 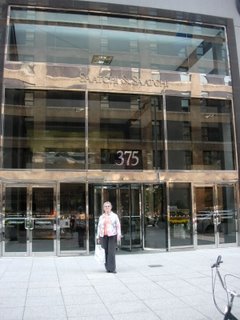 Travel? Money was so scarce that having to buy a new tyre for the car was considered a major expense, to be carefully budgetted for, and home remedies were tried before the doctor was called. So even this second visit to Penguin still had its aura of magic. Of a dream come true.

My editor and I had an interesting chat about what makes a book sell (no idea), about trends and Dan Brown, and how tough it is sometimes to sell something good to the public. I count myself fortunate that she loves my work, and had faith in it.