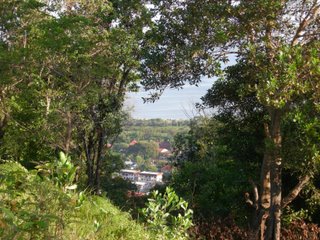 Writers tend to sit. A lot. Some of us don’t even have a normal outside- the-house job that gets you moving (as far as the car in the garage anyway). When living in West Malaysia, my husband and I try to walk every morning, just at dawn, by going to a local park on the banks of a river. 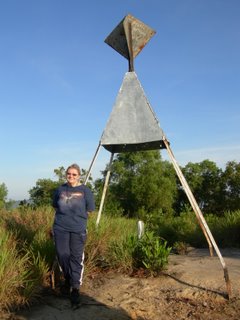 In Sabah though, I reckon we have one of the best morning walks ever. It takes less than an hour, and I suspect we will speed it up even more when we get used to climbing the mountain involved (well, it’s gotta be a mountain, doesn’t it? – it has a trig point on top!!) 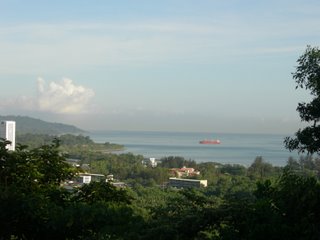 We start at the pond, and from there on, it’s climbing most of the way. As we go, the view unfolds: tantalising glimpses of the South China Sea through the trees, then a full blown vista, Kota Kinabalu, the islands of the marine park, and the hills in the other direction. 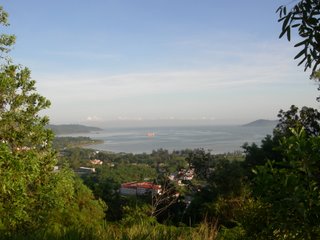 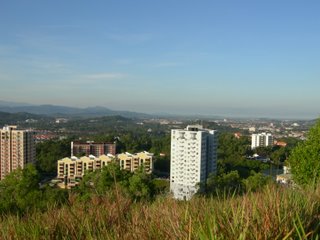 And then, right at the top, the Crocker Range and the sun over the distant many peaks of Mt Kinabalu. And the trig point. 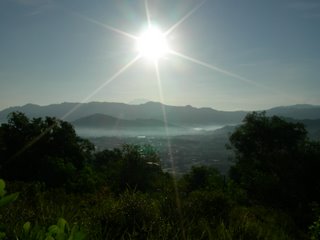 In the pix with the buildings, our starting point, the apartment is that pinkish building behind the long white block. Taken halfway up the hill.

If you look hard at the pix with the sun, you will see the pale blue rocky peaks of Kinabalu in the distance.