↓
Home Menu ↓
Skip to primary content
Skip to secondary content
Home→Blog→Blog→Something else two writers of epic fantasy have in common…
I have mentioned before that one of my ancestors, Richard Pickersgill, was on board His Majesty’s Bark (sic) Endeavour when it sailed into Botany Bay under Captain Cook in 1770. Richard, just 19 years old, had been hand-picked by Cook, because he already had several years experience — sailing around the world on board another vessel.
Richard was appointed Master’s Mate, and later became Master, of the Endeavour.

Cook had a high opinion of Lieutenant Richard Pickersgill’s surveying skills, often sending him off exploring and mapping coastal areas. Cook also admired his skills at handling native peoples, and even used him as an ambassador, because of his skill at dealing with dignitaries at European colonies on route! Not bad for a Yorkshireman who was only 22 when they returned to Britain in 1771.

Family legend had previously told me that Richard was renowned for his drinking and
his life had ended when he fell between a ship and the wharf back home
in Britain. Family legend also said that it was his tales of Botany Bay
that led to my great grandfather migrating to Australia in the 1840s.

When I was in Sydney earlier on this year, these stories alone gave me the incentive to visit Endeavour
replica, now moored in Sydney Harbour. This ship, commenced in 1988,
and finished in 1994 in Fremantle, Western Australia, recreated part of
the original Endeavour‘s journey in the 1990s.

I did have another reason to want to look around a replica of the
eighteenth century sailing ship; it would be invaluable research for my
upcoming trilogy, part of which is about the European trade to the
spice islands, set in a period vaguely resembling the 1750s.

For this reason, I dragged my pal and fellow writer, Karen
Miller off to the Maritime Museum. Actually, I didn’t have to drag her at all, because––guess
what––Karen also had an ancestor who sailed aboard the original Endeavour. In fact, he was a senior officer, and outranked poor Richard who didn’t get a cabin, but had to mess with the seven midshipmen — until he replaced the Master who died on the way home.

Karen’s ancestor was Second Lieutenant Hicks, who died of TB in Batavia. His moment of fame? He was the first person to sight the Australian coast! 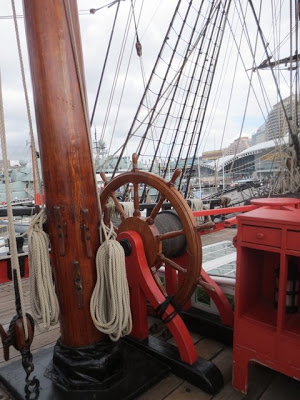 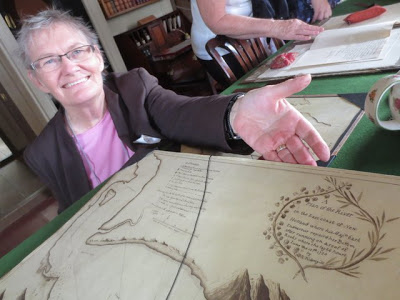 And here’s me looking at a replica of a chart of Queensland, surveying and drawing done by Richard.

And so, there you have it. Two Australian fantasy writers go to see the Endeavour and thereby discover that they’d both had members of their families aboard. Mine made it back to Britain; Karen’s, alas, did not. For a moment, we could imagine what it would have been like to be part of the crew of the Endeavour; and we could marvel at the fact that Richard Pickersgill and Zachary Hicks knew one another 240 years before Karen and I ever met…