↓
Home Menu ↓
Skip to primary content
Skip to secondary content
Home→Blog→Blog→For my dad, who never wanted to go to war

Today is Anzac Day. My dad was nearly an Anzac. He was part of the 1st AIF, sent to reinforce the troops at Gallipoli. They landed first in Egypt, but by then, the withdrawal was decided upon and his unit was sent to France instead.

There, his job was to drive mule trains of munitions to the front. He was at the Battle of Ypres.

Whatever he saw, he never mentioned.

After the war, it was almost a year before he was home again, even though he was not regular army. There were no ships to bring back the non-wounded… 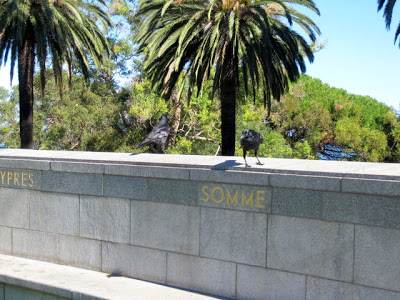 This photo I took at the War Memorial in King’s Park Western Australia. A couple of ravens are standing on the wall contemplating the names of two horrendous slaughter grounds for young men: Ypres and the Somme.
And we still haven’t learned a thing.