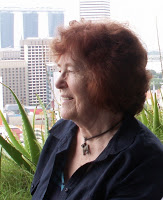 So one of my old friends returned to her old haunts…
Neither of us could resist a poke around the birding spots we’d made our own so long ago. Idiot Glenda left her camera at home, so the photos on this page were taken by Gill, who is much better looking than me, as you can tell.

We started at the old mining pools of Bidor, where we picked up gems like Cotton Pygmy-Goose, and lots of waterbirds such as Little Grebes, three species of Egrets, Purple Gallinule. And loads of open country birds, Yellow Wagtail and 2 species of bee-eaters among them. The lake area below yielded 15 species of bird in 15 minutes. 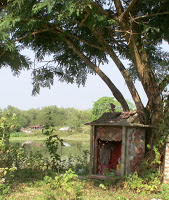 And there are other things to look at too, like water lilies and this Chinese shrine under a tree…

Along the road we saw a courting Crested Goshawk fluffing out his flank feathers into white cotton balls and winnowing his wings. 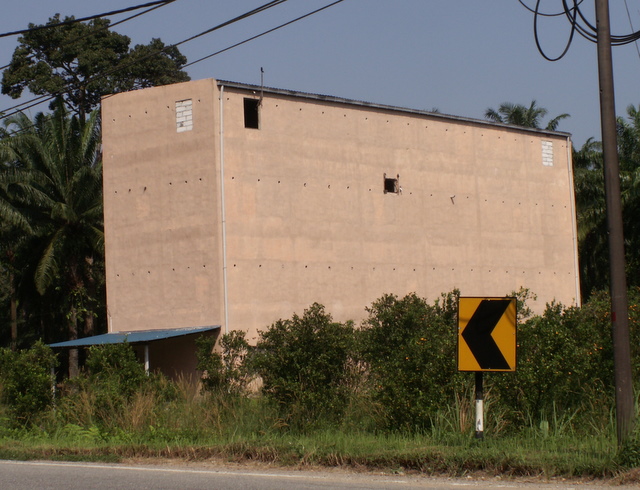 We then headed towards the ricefields of Ulu Dedap area. There was plenty to see along the way, such as the proliferaton of swiftlet motels. These ugly buildings are springing up everywhere, adorned with loudspeakers that play the endless twittering of the Edible-nest Swiftlet, ad infinitum. This brings the birds in to nest within the dark, airconditioned rooms, accessible only by tiny holes in the walls. Their initial nest will be stolen from under them, they’ll build again and hatch their brood. This nest will be used after the young fly.
Somehow bird saliva doesn’t appeal to me, but you can kid people into anything with the right marketing and a lack of scientific evidence. 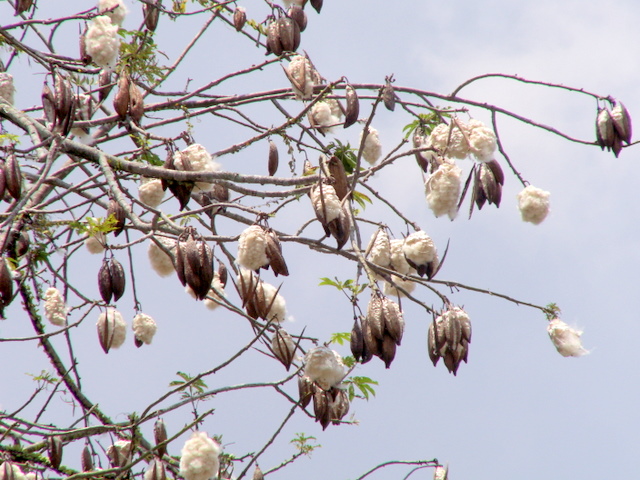 And here we have a very productive crop — these trees were in seed everywhere. When I was a kid, it was in fact an important important product for us because it stuffed our mattresses and pillows in Australia.

Yep, this is kapok. It was in season, the white fluff that carries the tiny seeds blowing on the wind in every village we passed through… 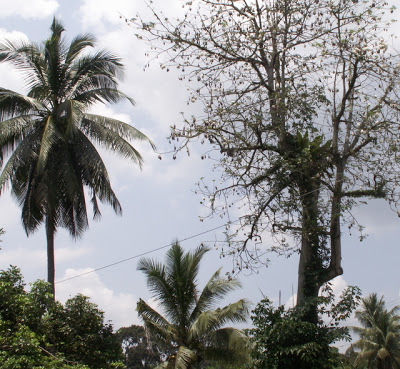 Here’s the tree itself on the right.

The ricefields were fairly barren of raptors, apart from Kites:  Brahminy in abundance, and a couple of Black, plus one Black-shouldered. Egrets and herons and pond-herons were there in all sizes and colours, a couple of stilts and Wood Sandpipers, a snipe, Common Sandpipers.The big event of the morning, though, were nineteen Lesser Adjutant storks both on the ground and kettling up into the air.

That strange little birdhouse on a pole in the photo is for roosting or nesting barn owls, encouraged because they eat rats in the fields.

On the way north we came across a troop of Long-tailed Macaques which included a lot of youngsters. They were crossing the road in front of us, so I stopped the car and we waited. The final contingent of the group were very sensibly  reluctant to walk in front of the car, and headed over the road on a tightrope instead, which was very entertaining. 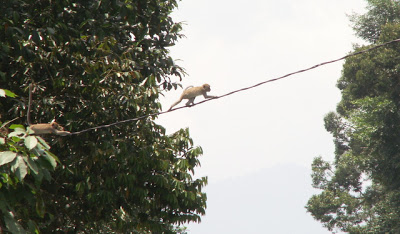 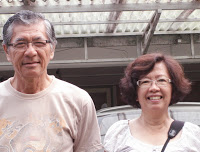 After meeting top-birding friends in Taiping, we had a couple of days under their wing –Taiping Lake Gardens (with its nesting hornbills and the fabulous roost of egrets and night-herons; as the day shift comes in, the night shift flies out); Kamunting mining pools where the pratincoles (below) were all over the place….

And the cattle egrets were doing what they do best: sit on the cattle. 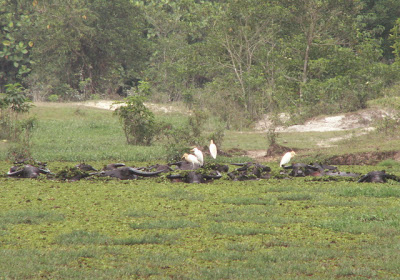 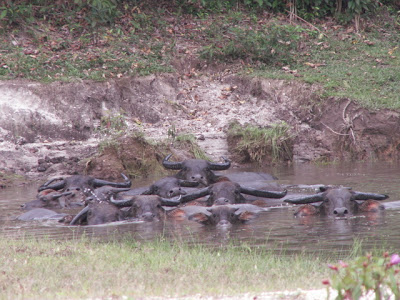 A morning on Maxwell Hill (Bukit Larut) resulted in 4 Blue Nuthatches at a nest. We dipped on the White-throated Rock Thrush (but I saw it there will Gill years ago). We ended the trip in Kuala Gula, picking up a rare Milky Stork and a Rusty-rumped Warbler (once called Pallas’ Grasshopper-warbler), Silver Leaf-monkeys, four species of kingfisher and a Spotted Wood Owl, plus the usual suspects of herons, redshanks and mangrove birds.
Believe me, there is nothing better than a few days spent with special friends birding.