↓
Home Menu ↓
Skip to primary content
Skip to secondary content
Home→Blog→Blog→Wild animals are — guess what — wild.
Sad news out of Sabah. A young Australian tourist died while apparently — if news sources are to be trusted — taking photos with a flash of a single bull elephant in the Tabin Wildlife Reserve. From just 10 metres away.
I am so saddened by this whole incident. An unnecessary death of such a young person, with so much to offer the world.
She was a vet, and I find it a little surprising that someone so experienced with pets would not be a bit more wary of wild animals. If a domestic cute dog can bite when cornered and frightened…what is the logical expectation of a wild animal?
On two separate occasions I saw herds of wild elephants in Sabah. I also saw how they were respected by the guides of the Danum Rainforest Lodge. They would never have dreamed of deliberately getting ten metres from an elephant in an a tough off-road vehicle, let alone on foot. So what was the guide at Tabin thinking?? Or did the visitors he was guiding ignore his advice? 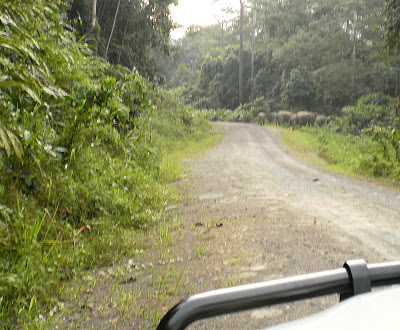 Here’s the photo I took of a herd of elephants at Danum, through the windscreen of a 4WD. The guide stopped the car and did NOT approach any closer. He knows the elephants.

Elephant culture is such that the boss of the herd is the matriarch. Males leave the herd in their “teenage” years and are henceforth never a permanent member of the group. They are known to be irascible and sometimes aggressive, also susceptible to “musth” or periods of testosterone overload when they are absolutely unpredictable.
Who on earth thought it was ok to step up to a bull elephant and take a photo? Sabah rainforest ain’t no zoo!
In one way, I blame these plentiful wild animal TV shows, where we are shown details of a bug strolling across a lion’s mane, giving the impression that the cameraman was within stroking distance of the lion king. Believe me, she was not. The modern cameras these guys lug around can take that same shot from 500m away.
Worse still are the animal wanglers, wrestling everything from snakes to fish to crocodiles into submission in the name of “science” (pah!) as if they were cute cuddly teddy bears. They either have a death wish, or they are supported by a whole team of people with cattle prods and stun guns and tasers and anaesthetic darts and nets and poison antidotes.
Wild animals are ….WILD. You keep your distance.
Yeah, I know there are greedy opportunists selling you bags of peanuts so you can give them to the monkeys at some tourist spots. DON’T. Worse still, don’t give the bag to your cute 3-year old daughter to feed that monkey (which I have seen stupid Malaysian parents do). Have you had a good look at the canine teeth on an adult macaque lately? They are as long as my thumb.
I’ve spent many weeks in the rainforest, camping in flimsy tents, walking the trails knowing there were tigers in the vicinity, seeing the leopard and bear tracks, having the orang utan throw things at out boat in anger because he thought we were too close (we were actually too far away to be hit), seeing the cobras and the vipers. I am not particularly nervous, but believe me, I don’t do anything stupid either. It’s wild out there.