Just recently I was up in the north, in the state of Perak, the only place where all of Malaysia’s ten species of hornbill can be reliably found, all species totally protected. Once, a couple of years back, my friends and I saw all ten in 24 hours, one of the most glorious days of my birding life; something I will remember till the day I die. Not sure if anyone else will ever be able to do that, because there are people who don’t like hornbills, or at least not live ones.

The northernmost part of the state is a state park, where – in theory – all wildlife is totally protected. Unfortunately, the army is also there, obstensibly to protect us from incursions by armed foreigners.

And here below we see the brave soldiers protecting us from … um … aerial attack?
Geez, look at the weaponry on that bird! 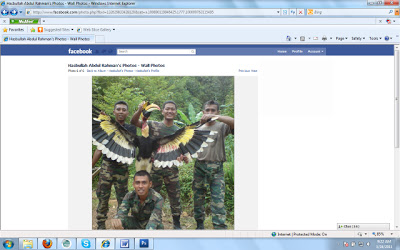 They were so proud of their success in this endeavour, that they snapped a few shots and put it up on facebook. Then wondered why people got upset. The page was taken down. However, as we all know, once you put a thing up on the internet, it has a habit of haunting you with an eternal life of its own. 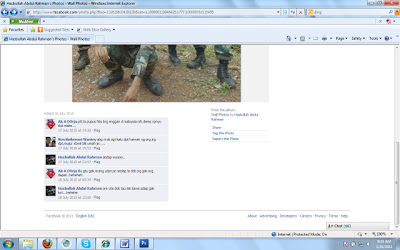 Here’s a second snapshot of the facebook page, where the commentary jokes about how wonderful it is to eat rare wildlife, and how the more difficult to obtain, the tastier it is to eat. They make no attempt to hide the fact that they ate this bird. It is a Great Hornbill, one of the most magnificent of our large avian species.

In the enlargement below, you can see that it has blood on its wing, indicating that it was probably wounded first, and then it was slaughtered in the Muslim way, by having its throat cut to drain the blood. This latter wound is a dead give away that it was going to be eaten. 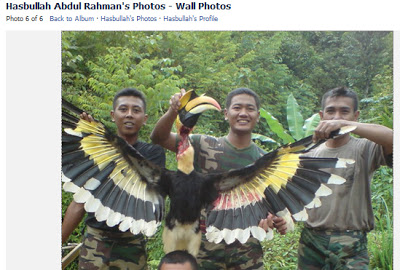 To be quite honest, I feel a bit sorry for these very silly young men. They are so ignorant, they can’t see that they did anything wrong, as is obvious from posing for the photo, and then posting it.

They are so ignorant, they can’t see a value in wildlife, or in obeying the laws of their own country.

It is their officers I blame. The mature men with rank who don’t care to teach their soldiers the law, or their role in protecting their country. Or what love for one’s country entails. You can’t tell me that their immediate superiors didn’t know they were doing this — and that this kind of thing has been going on for a long, long time. I’ve been hearing about it for years! And this is not the only photo I’ve seen. See here for more:skinning monkeys if you’ve got the stomach for it, taken well over a year ago.

This hornbill incident with the photographic evidence has been reported to the authorities. We are waiting to see what action is being taken. As I have heard nothing so far, I am making this post just to make sure that the issue stays alive. Obviously it would be very, very easy for the army to give the names of these young men to the Wildlife Dept/law enforcement.

As you can see from the photo, the soldiers are obviously starving. They are obviously desperate to cook and eat this bird, so desperate that they stopped to take a photo. I’m not kidding; my source for this info is excellent; a senior army personnel said that these poor young men were starving because they missed a food drop while on rainforest patrol due to bad weather!! They therefore had to kill to survive.  (If you believe that, well I have a set of twin towers in Kuala Lumpur to sell…)

One good thing, I suppose. An army officer in Kuala Lumpur was obviously worried enough to lie.

Ask the native peoples who live within the park boundaries about reporting poaching and they will shrug and say sarcastically, ‘Who do we tell when people poach here? The army?’

Pagar makan padi. In Malaysia, the fence eats the rice.

I shall keep you posted as to whether the authorities ever do anything, or whether they allow their government employees to get away with breaking the law … because they were starving. (Hey, you snatch thieves out there – next time you get caught try that one as an excuse! Your honour, yes, I stole the purse, but I was starving…)