↓
Home Menu ↓
Skip to primary content
Skip to secondary content
Home→Blog→Blog→Win some books. In fact, a lot of books…
How would you like to win every single Orbit book published in 2011?
Orbit Quest
Orbit is one of the biggest publishers of science fiction and fantasy and to live up to their heavyweight status they’re delivering a KING SIZED competition for SFF fans. Don your amulets and dust-off your hooded cape  – get ready for this epic quest… 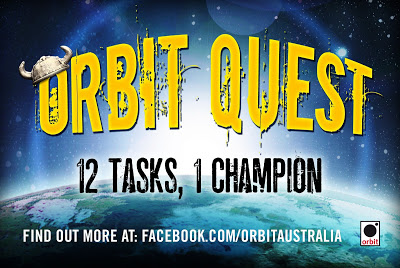 Orbit Australia is laying down the gauntlet. They want to find the most knowledgeable, the most worthy and the most steadfast fan to be knighted the Orbit Champion for 2011.
The winner of Orbit Quest will receive EVERY NEW RELEASE TITLE from Orbit books for 2011. (That’ll be around 70 books!)
There are 12 simple tasks, each of which garners points. The challenger with the most points at the end of the quest will be knighted Orbit Champion for 2011. One does not have to complete all the tasks, but each task you complete can mean more points.
Listed below the first 11 tasks…
Your time begins now and the competitions closes 30 November 2010 at midnight EST.
Please see our full T&C’s to check the finer points and go to the Orbit Australia Facebook page to register. Ask any questions below or email orbit@hachette.com.au
Good luck, keep steadfast and fight with honour.

–  from The Orbit Team