I loved the 2009 movie “Sherlock Holmes”. But even as I really enjoyed it, I felt a tinge of …what, regret? Regret that this film really wasn’t my idea of Sherlock Holmes and Dr Watson, as per Conan Doyle. There was something missing. It’s ironical then, that I should find my nostalgia for the real thing indulged to the full — in a movie set in the London of today, with handphones and blogs and computers. And yet I did. Along with loads of action and adventure. 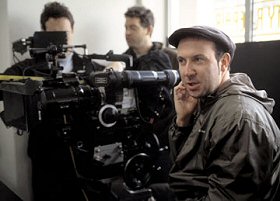 If you are in the UK this Sunday night you have a chance to do the same. The film is a 90 min made-for-TV BBC production. It’s called SHERLOCK, it’s on this Sunday night — and it will be coming to other parts of the world soon, so don’t despair if you live elsewhere. And the really, really good news is that it’s only the first one, A Study in Pink. There are at least another two to come, of equal length. The first and the third are directed by the film director (Push, Wicker Park, The Acid House, Lucky Number Sleven, etc) Paul Mc Guigan (see pic) which doubtless accounts for the film quality of A Study in Pink — which I was privileged to get a sneak preview of in post production, thanks to Paul. (I also was on the set of the third in the series too…) It had no music yet and was missing some tweaking, but it knocked my socks off as a drama, as a Sherlock Holmes mystery, as a modern version of something basically Victorian, and as a brilliant piece of directing with a fabulous script and cast.

“Sherlock Holmes”, 2009 film version, was Victorian England with a 21st century feel.  “Sherlock” is 21st century TV with a Victorian feel. Marvellous stuff. You’ll love it. Of course as I happen to think a great deal of Paul, I am probably biased. No, no, I’m not. It’s a GREAT film.

So you know where you should be in UK at 9p.m.on Sunday. In front of your TV set.

Take a look here for more about the cast etc: BBC link.
And here for a fan page: http://www.sherlocking.org
Later: And Cat has just told me about the trailer which can be seen here.
.