↓
Home Menu ↓
Skip to primary content
Skip to secondary content
Home→Blog→Blog→Maid, lackey or serf? What some Malaysians think of their hired help.

There has been a lot of talk here over a proposal to legislate to ensure that maids (usually foreigners) have one day off a week. That’s right. Apparently domestic workers don’t come under normal labour laws because they work in the house. (Ok, as a housewife I don’t get an automatic day off either…)

But my first reaction when I heard this was…wtf? You mean there are people out there who don’t give their maids a day off???

For those of you who don’t know how things work here: almost all urban women work full-time. It is very hard to make ends meet on a one-salary family, even on a fairly modest scale, especially at the beginning of their careers, and yes, that applies even if you have a university degree. The solution used to be that you got the kids’ grandmother to look after your kids. Nowadays though, grandma is probably working too. So you look for a maid. Most full-time domestic help is from overseas, usually Indonesia or the Philippines.

Back in the days when my kids were little in the 70s and early 80s, we had a maid too. She was local and every 3 months she took a week off to go visit her family in another state. And if she wanted to go out at other times, she asked for time off. Usually she went out several times a week, sometimes sleeping over with friends. I never refused unless we had a function to go to and needed a babysitter, which was pretty rare. When the first maid left to get married, we hired her sister. I taught her English and we helped her get a place in a college to do hotel housekeeping and she left. Her younger sister came in her place, and she stayed until she got married. After that, my kids were big enough to pull their weight, and I have not had a maid since. Whenever I am down in western Johor, I drop in to see those 3 sisters…

The government has now dropped the idea of the legislation, saying it is not necessary. Really? Hmm.

Here is one letter to the newspaper (The Star, Monday 22nd June).

It starts like this: ‘I am appalled to read a recent headline in our local press suggesting the need to legislate…’

Good, I thought. Here’s someone as appalled as I am.
And then I read on.

The writer even signed the letter with his name. Their maid is apparently expected to work for two years, seven days a week, living in. I wonder if they are allowed out of the house compound?

I thought that was bad enough. And then I heard of a maid (not in Malaysia but a neighbouring country) whose husband died back in her own country. And she was refused leave to go home for the funeral.

After that depressing thought, here’s a photo to calm you down. Sunset outside our chalet on Tioman. Taken while sipping a glass of cab-sav in a chair on the lawn… 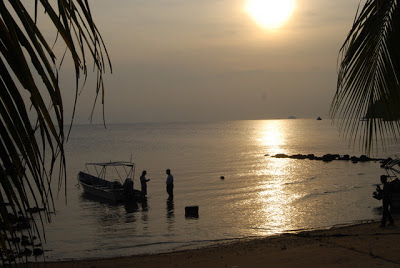